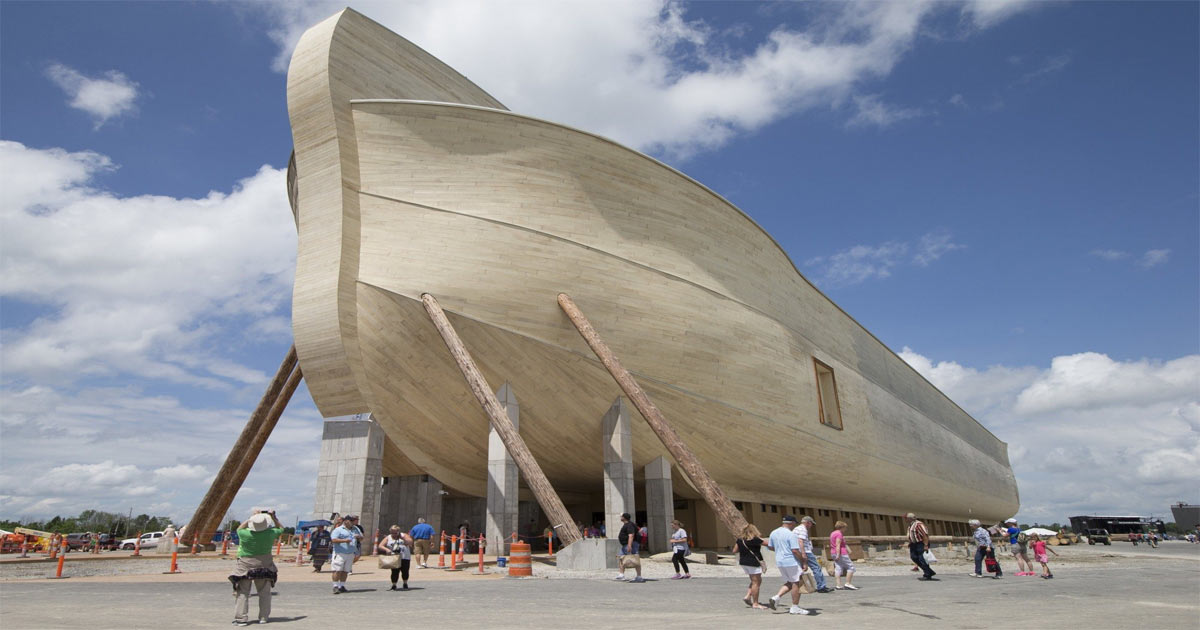 No one knows about that day or hour, not even the angels in heaven, nor the Son, but only the Father.

As it was in the days of Noah, so it will be at the coming of the Son of Man. For in the days before the flood, people were eating and drinking, marrying and giving in marriage, up to the day Noah entered the ark; and they knew nothing about what would happen until the flood came and took them all away.

Are you feeling all alone these days as you watch the Satanic Globalists move closer and closer each day to implementing their plan of installing a New World Order that drastically reduces the world’s population, and collapses the world’s financial system to begin the Great Reset, while everyone around you seems blind to these realities and just continues to live their lives as if everything is just going to “return to normal?”

If this is what you are feeling right now, take heart, and stand firm. Because this is how the world treated Noah as he obeyed the voice of God and built an ark to save humanity and most of the animal kingdom, while he warned people of God’s impending judgment and the coming of a worldwide flood in the ancient world, where up until that point it had never rained.

Nobody listened to him to build their own ark, which would have been far easier to build than the one Noah was building to also save the animal kingdom, just to save themselves and their families, and they paid the ultimate price for mocking a righteous man who was going against the crowd in obedience to what God had told him.

By faith Noah, when warned about things not yet seen, in holy fear built an ark to save his family. By his faith he condemned the world and became heir of the righteousness that comes by faith. (Hebrews 11:7)

When Jesus walked the earth he warned his followers that the same thing that happened in the days of Noah preceding the flood would be happening just prior to his coming back to earth to judge the world, where people would act as if tomorrow would be the same as any other day, failing to recognize the times and season they were living through.

Whether or not Jesus is about to come back and judge the world, which the Bible tells us will involve destroying the present earth and heavens with fire, there can be no doubt that this current generation that we are living in is about to go through major upheaval and change, and not for the better.

This has been the pattern throughout the history of the human race. King Solomon wrote in the Book of Ecclesiastes:

Whatever is has already been, and what will be has been before; and God will call the past to account.

He also wrote about the seasons of life:

The problem facing Americans living in the United States today is that we have all been living in one long season since the end of World War II, and the rise of industrialization and technology, leading people to believe that this is the only season that is real and that it can never change.

All of us alive today who have been raised in the U.S. and educated in the U.S., whether public or private education, it doesn’t matter, have been taught that America is the land of freedom, and opportunity. We were taught that this is a democratic republic, where everyone can participate in the political process, and anyone can become president, or build a great business through entrepreneurship.

The prosperity that has existed in the United States since WWII is what has drawn millions of people from other countries around the world to want to come here and chase “the American dream.”

The great “American Dream” came to be known as working hard, getting an education, excelling in a good job, purchasing your own home, property, etc. and then rewarding yourself with a two-day “weekend” to go out and have fun, and once a year taking a “vacation” to have even more fun. 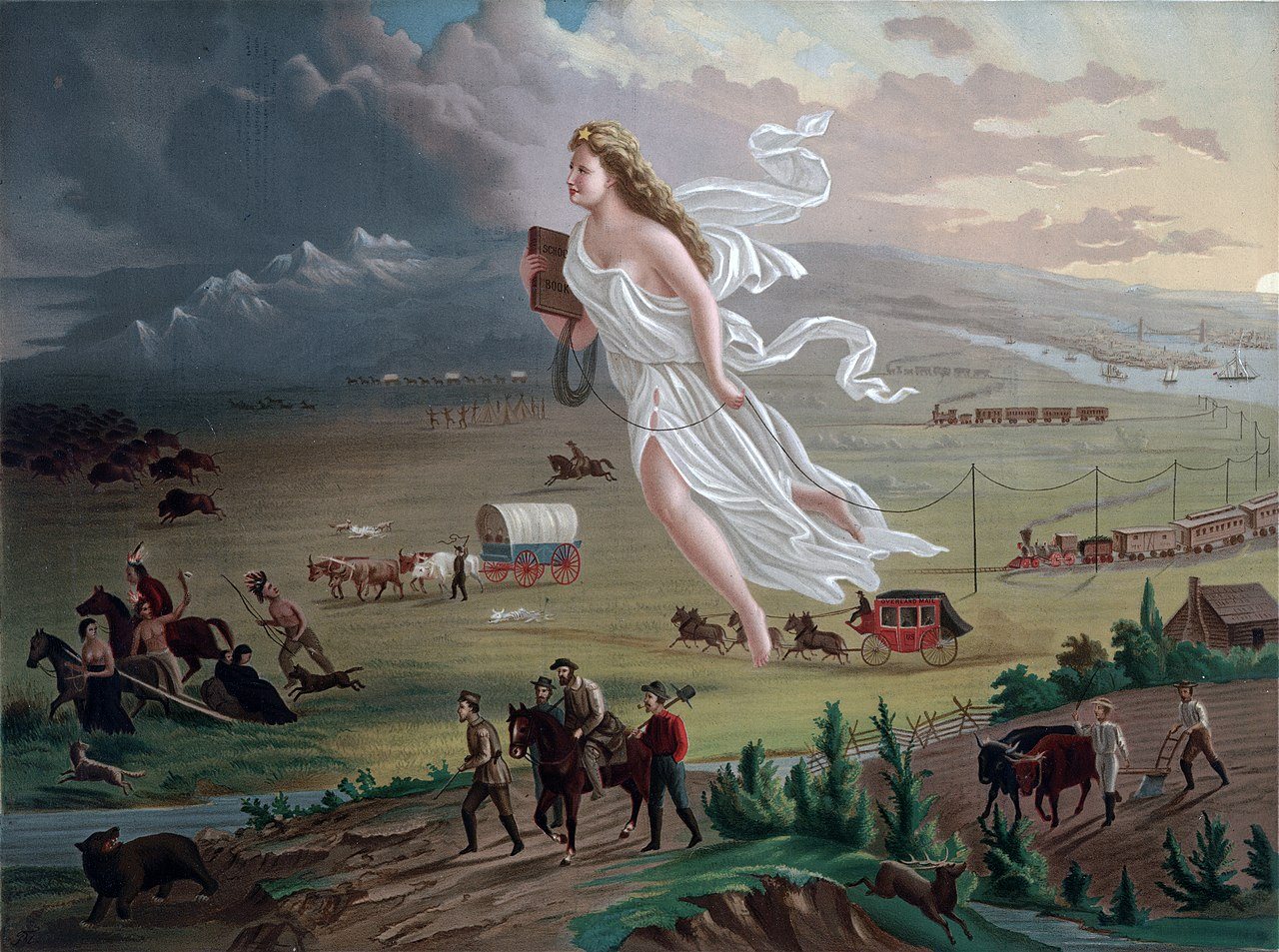 This painting shows “Manifest Destiny” (the belief that the United States should expand from the Atlantic to the Pacific Ocean. In 1872 artist John Gast painted a popular scene of people moving west that captured the view of Americans at the time. Called “Spirit of the Frontier” and widely distributed as an engraving portrayed settlers moving west, guided and protected by Columbia (who represents America and is dressed in a Roman toga to represent classical republicanism) and aided by technology (railways, telegraph), driving Native Americans and bison into obscurity. The technology shown in the picture is used to represent the outburst of innovation and invention of modern technology. It is also important to note that Columbia is bringing the “light” as witnessed on the eastern side of the painting as she travels towards the “darkened” west. Image source.

But the worst lie is the one that is mixed in with truths and half-truths, and that is what the “American Dream” has always been.

One of the first lies we need to repent of is that this country was founded by Godly men, and represented the values of “freedom” and “equality” for all.

While it may be true that there were some Godly men and women who participated in the founding of this nation, and that there are some principles of “liberty” and “equality” written into our Constitution, that is only part of the story.

Many of our “founding fathers” were actually Freemasons, such as George Washington who was a 33rd degree Freemason and heavily involved in the occult. Many of these “founding fathers” were involved in human trafficking bringing their African slaves with them, to develop America’s rich agricultural landscape, often by killing and chasing off the land of the original inhabitants, the native Americans.

Where was the “liberty” for them? How were they treated “equal”?

We have been so brainwashed in this country to see things like only one of two ways: I’m right, and you’re wrong. Right-wing, conservative, Republican, or Left-wing, liberal, Democrat.

We fail to see that there is a lot of evil on both sides, but also some truth on both sides. And worst of all, we have redefined “right” and “wrong” mostly in terms of ideology, rather than moral absolutes.

For those who have benefited from the “American way of life” since WWII, that benefit has come at a great moral cost.

The “freedoms” that you think you have enjoyed, being able to work a nice job, drive your own car, own your own home, have happened because the Globalists who control the banks and the financial system have allowed you to enjoy those things, and most of you have no clue what the real price is to enjoy this illusion of “freedom.”

“Healthcare” is a myth, of course, because all we really have in this country is “medical care,” which is disease management that makes the Globalists rich, and allows them ultimate control.

You thought you were living in the freest, modern country in the 20th and 21st century, and never even knew that you were a slave the whole time.

You never bothered to peek behind the curtain to see who was really running the show, as long as you could hold down a job, raise a family, provide them an education, plan your weekends and vacations, and live “the American life.”

Because all the things modern technology has provided to make your life easier has also allowed the Satanic Globalists to have more and more control over your day to day lives as well, making you more and more dependent on “the system,” to the point where now they can tell the American people: take this experimental injection, and you can have your freedoms back.

You fool! YOU WERE NEVER FREE, TO BEGIN WITH!!!

They exchanged the truth of God for a lie, and worshiped and served created things rather than the Creator. (Romans 1:25)

We are a nation of idolaters, putting our faith and devotion into “the system” rather than trusting in God and choosing the hard path, the same path that Jesus went down, leading to his death, as an example for us to follow.

If anyone would come after me, he must deny himself and take up his cross and follow me.

For whoever wants to save his life will lose it, but whoever loses his life for me will find it.

What good will it be for a man if he gains the whole world, yet forfeits his soul? Or what can a man give in exchange for his soul?

For the Son of Man is going to come in his Father’s glory with his angels, and then he will reward each person according to what he has done. (Jesus Christ, Matthew 16:24-27)

There is only one true freedom, one true liberty, and that is to escape the judgment that is coming because we are all guilty, and only those who have been forgiven and declared “not guilty” because someone else paid the price for our guilty sentence, will be truly “free.”

It is for freedom that Christ has set us free. Stand firm, then, and do not let yourselves be burdened again by a yoke of slavery. (Galatians 5:1)

So for those of you who are now enduring ridicule and scorn from those who are obeying the slave masters in “the system,” take heart, and stand firm in your faith.

I know it is difficult, especially if your own family members and friends are acting as if everything is going to be the same tomorrow as it always has been, completely oblivious to the day and season that is now upon us because I am experiencing the exact same thing right now.

You need to stand firm. Keep building “your ark” to save yourself, and keep speaking the truth and warning others as a “watchman,” because this is the narrow path we have been called to, and there is no other way.

Shocking (NEW) Proof This Is The Final Generation

Wait Harvesters For Time Is At Hand – The Messenger