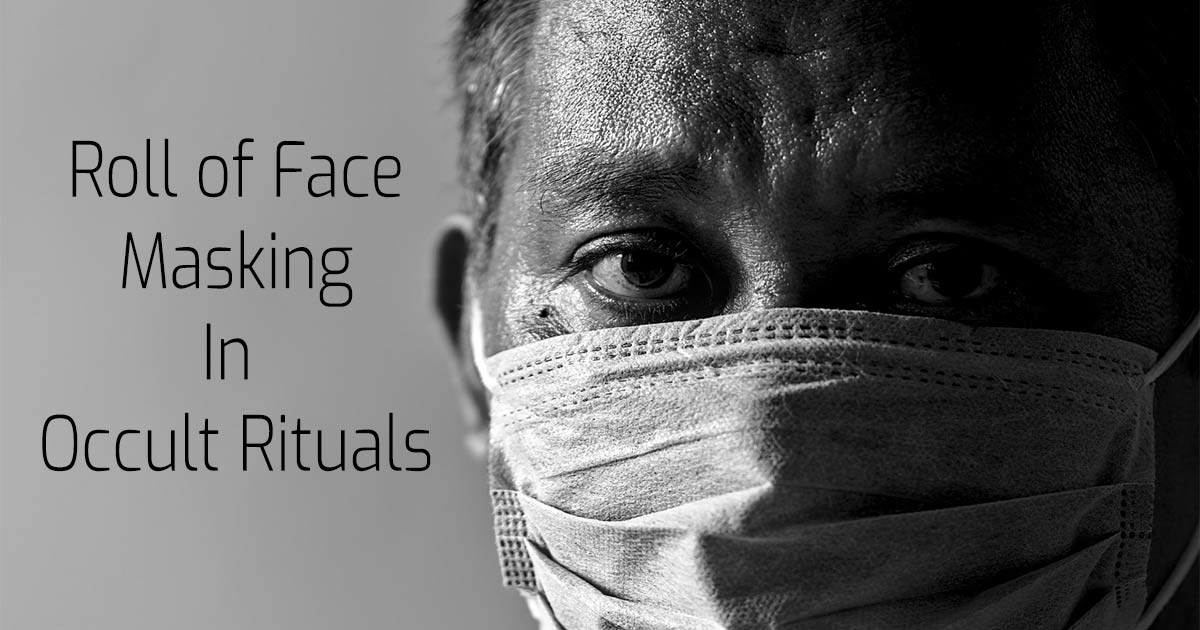 For the past few weeks, I have been trying to figure out the reason behind the mandating of face masks that are ramping up even as the deaths from the COVID-19 pandemic have wanned.  Since there is no logic to it, could it possibly be something else more sinister?

As with everything you see, read, hear, or are commanded to do; use your discernment. Some will think this is crazy, but as we know, the people who are trying to take over the world to create a New World Order are Luciferian occultists, and they believe this stuff, whether you do or not. I don’t know how much stock to put in this, but again, use your own critical thinking skills and discernment and see if any of this information resonates with you.

According to a website called Have Ye Not Read, the coronavirus has provided those pushing the New World Order with an opportunity to initiate people into their new position as a slave with occult ritual transformations.  The article is long, but it details how mask-wearing, hand washing, “social separation” and lockdowns are age-old occult rituals being used to initiate people into a New Global Order.

AMONG OTHER THINGS, THE WEARING OF THE MASK OVER ONE’S MOUTH IS A TOKEN OF SUBMISSION…A GESTURE OF YOUR WILLINGNESS TO BE SUBJECT TO OTHERS WHO ARE NOT YOUR USUAL SOVEREIGN.

BUT THERE’S MORE.  ACCORDING TO THE ENCYCLOPEDIA BRITANNICA, MASK-WEARING IS:

“A FORM OF DISGUISE OR CONCEALMENT USUALLY WORN OVER OR IN FRONT OF THE FACE TO HIDE THE IDENTITY OF A PERSON AND BY ITS OWN FEATURES TO ESTABLISH ANOTHER BEING.”

THE WEARING OF THE MASK IS SIMPLY PART OF THE INITIATION RITUAL USED TO VISUALLY AND PSYCHOLOGICALLY SIGNAL YOUR CONSENT TO THIS NEW ARRANGEMENT.  –HAVE YE NOT READ

But it gets more sinister.  Hand washing is also being used to symbolize your willingness to wash away and bring in the New World Order of evil control. If you don’t believe in any kind of religion, remember, those trying to enslave you do, and they very well could be using occultic rituals to do it. Again, discernment is necessary.

FOR THE PURPOSES OF OCCULT RITUAL INITIATION, THE POWERS-THAT-BE HAVE YOU SYMBOLICALLY WASHING YOUR HANDS OF YOUR DUTIES TO CHRIST HIMSELF.

TO THE OCCULTISTS, THIS FORCED OCCULT RITUAL WASHING OF THE HANDS REVERSES PILATE’S PUBLIC HANDWASHING RITUAL, WHICH, FOR THE LAST 2,000 YEARS, HAS PUT THE ONUS FOR CHRIST’S DEATH ON THE HANDS OF THE RITUALISTS THEMSELVES, AND ABSOLVED CHRIST (AND THE ROMANS) OF ALL GUILT.

YOUR RITUAL WASHING OF HANDS HAS YOU SYMBOLICALLY (ALBEIT UNCONSCIOUSLY) WASHING AWAY YOUR OLD POSITION – YOUR OLD MASTER AND HIS PRESCRIBED WAYS — IN ANTICIPATION OF YOUR NEW MASTER AND HIS.

IT’S THAT SIMPLE.  HAND WASHING IS THE OCCULT RITUALISTIC SYMBOL OF REJECTION. –HAVE YE NOT READ

Social distancing is also “ritualistic” in nature, not to mention a CIA tactic of torture. Not to mention the use of the number 6 (6 feet apart) which these psychopaths tend to use quite often.

MUCH LIKE MASK-WEARING, SOCIAL DISTANCING IS A LIE.  IT CANNOT POSSIBLY WORK.  YET WE’RE BEING FORCED TO PARTICIPATE IN IT.

BUT SYMBOLICALLY SPEAKING, THE RITUAL OF “SOCIAL DISTANCING” — AT THE MAGICAL “SIX FEET” APART – IS THE PART OF THE INITIATION RITUAL THAT SEPARATES YOU FROM CHRIST. –HAVE YE NOT READ

The lockdowns are simply more psychological trauma and are being used to initiate people. When you comply, you signal to the Satanic elitists that you are willing to be enslaved by them and their religion.

THERE ARE BASICALLY FOUR STAGES TO AN ISOLATION RITUAL:

STAGE 1:  ISOLATION FOR PURIFICATION (YOU’RE CUT OFF FROM THE NORMAL, AND THRUST INTO A “NEW NORMAL” THAT’S COMPLETELY DIFFERENT THAN YOUR PAST LIFE)

STAGE 2:  SURRENDER TO THE “NEW NORMAL.”  THIS OFTEN INVOLVES BEING GIVEN A TOKEN GIFT (THINK “STIMULUS CHECK”) LEADING THE INITIATE BELIEVE HE’S BEING WELL-TAKEN CARE OF BY HIS NEW OVERLORDS, SO THERE’S NO NEED TO REBEL AGAINST THE NEW ORDER ONE IS BEING INITIATED INTO.

STAGE 3:  SACRIFICE.  NO GIFT CAN BE GIVEN WITHOUT SOMETHING BEING TAKEN. IN THIS CASE, YOUR DIGNITY…YOUR SOVEREIGN INDEPENDENCE…YOUR VOICE…YOUR INDIVIDUAL POWER ON THIS EARTH AS A REPRESENTATIVE OF THE WORD OF THE MOST HIGH GOD – ALL OF THESE THINGS, AND MORE, ARE BEING TAKEN FROM YOU IN EXCHANGE FOR THE COLD “COMFORT” OF A NEW WAY IN A NEW WORLD.

You may not believe any of this. You may not be religious. I know I’m not. But those forcing this new world order down our throats plain and simply, do believe this.  They seem to be trying to initiate us into a new one-world religion of vile and disturbing tyrannical enslavement to them.