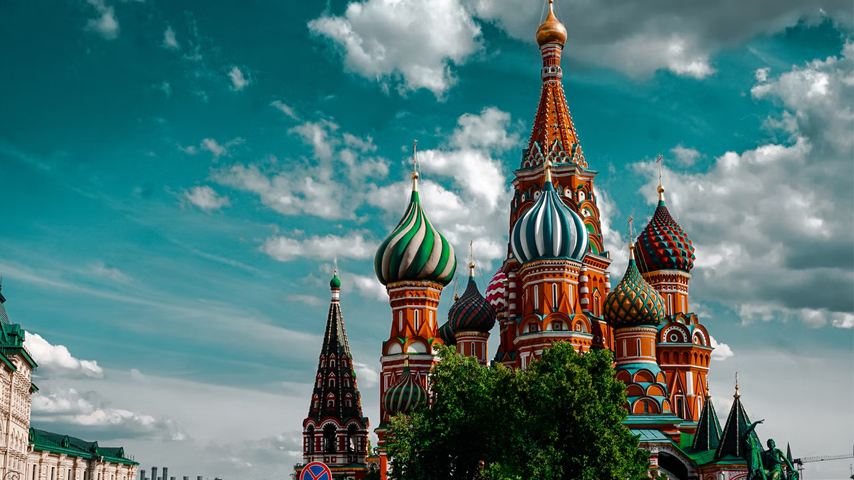 I believe it’s exceedingly important to study the Bible and prophetic “end times” events and to be able to recognize the coming deception and the Antichrist’s appearance, I have also been researching the words of saints, prophets, visionaries, etc.

One prophet I have taken an interest in and have covered several times is the Russian Youth Vyacheslav Krasheninnikov. His capability to seemingly peer into the past, present and future, as well as be able to discern the hearts of those around him, has exposed a wide variety of topics that I never thought possible – not until I researched some of the information that he provided.

With that being said, while I have certainly considered the possibility that his account was embellished, or perhaps even a target of the experiment of the technology that was/has been available at the time – feeding him information for the sole purpose of misleading believers – my conclusion is that there is something more than meets the eye with this individual.

So if I would be inclined to believe his prophecies, then I would also have to believe the figures that he venerates. God and Jesus Christ, of course, being the main ones.

But there is another prophet that Vyacheslav Krasheninnikov has referred to several times – at least according to his mother, Valentina Krasheninnikova. And it is this character that I wanted to research further to determine his outlook/visions for what will (and in some cases, may have already) come to pass.

In the short video below, St. Seraphim of Sarov, one of the most revered Saints in Russia (famous for his quote “acquire a peaceful spirit, and thousands around you will be saved”) reveals some of the insights he received about the fate of Russia and the Antichrist’s arrival before Jesus Christ’s second coming.

This is to be taken as a reference guide and not as a written-in-stone fact. I offer these alternative perspectives as a form of study and reflection, and to try and help us discern the coming age of deception and what we may be prepared to see, in order to help us make informed and conscious decisions.

Because of the birthplace of both Seraphim of Sarov and Vyacheslav Krasheninnikov, they have prophesized many things for Russia. And according to their prophecies, Russia will play an integral role in the biblical end-times Revelation, even being the designated birthplace of the Antichrist himself.

(Some embellishments have been added for emphasis.)

“Before the birth of the Antichrist, there will be a great and long war and a terrible revolution in Russia, passing all limits of human imagination, for the slaughter will be terrible. The rebellions of Ryazan, Pugachev and the French revolution will be nothing in comparison with what will take place in Russia.

Many people who are faithful to the fatherland will perish, church property and the monasteries will be robbed; the Lord’s churches will be desecrated, good people will be robbed of their riches and killed, and rivers of Russian blood will flow. But the Lord will have mercy on Russia and will bring her along the path of great sufferings to glory…

Everything that bears the label of Decembrists’, Reformers’, or belongs to ‘the party for the betterment of life’, is genuine anti-Christianity, which will bring about the destruction of Christianity upon the earth – even destroying a part of the Orthodox Church – and which finally will end with the enthronement of the Antichrist over all the nations of the world, except Russia.

She will come together into a single united body with the other Slavic nations and comprise a huge ocean before which all the other tribes on earth will tremble in fear. And this is as sure as 2+2=4. By the combined powers of Russia and others, Constantinople and Jerusalem will be inhabited. At the division of Turkey, almost all will go to Russia, and Russia with the united forces of many other States will take Vienna, and about 7 million native Viennese will remain… and there the territory of the Austrian empire will be constructed.

Because of France’s love for the Mother of God – the holy Madonna –, the country will be given to 17 million Frenchmen with its capital in the city of Rheims, while Paris will be completely destroyed. Napoleon’s home will be given to Sardinia, Corsica and Savoy. When the Russian Empire receives 180 million into its dominion, we must expect the appearance of the Antichrist.

The Antichrist will be born in Russia between Petersburg and Moscow, in that great city which will be formed after the union of all the Slavic tribes with Russia. It will be the second capital of the Russian Kingdom and will be called ‘Moscow-Petrograd’, or ‘the City of the End’.

Jesus Christ, the true God-man, the Son of God the Father by the descent of the Holy Spirit, was born in Israel, while the true Antichrist will be born amidst the Slavs and Russians. He will be the son of a virgin adulteress of the tribe of Dan, and he will be the devil’s son, through male seed that is artificially transferred to her. The spirit of darkness will dwell with him in her womb.

The Jews were scattered over the face of the whole earth because they did not accept and did not recognize the Lord Jesus Christ. But in the times of the Antichrist, many Jews will be converted to Christ, because they will understand that the Messiah they mistakenly wait for is none other than he about whom our Lord Jesus Christ said: ‘I have come in the name of My Father, and they have not received Me. Another will come in his own name, and they will receive him.’

Satan was the first revolutionary and through this fell from heaven. Between the teachings of his followers and the teachings of the Lord Jesus Christ there is nothing in common, but a huge gulf.

The Lord calls men to follow his commandments, and thereby He calls mankind to heaven, where righteousness dwells. The spirit of darkness promises the building of paradise on earth. So all revolutionary societies, secret or open, under whatever names they may come, no matter how attractive their appearance, have one common goal: the total destruction of Christianity, and paving the way to anti-Christianity in the face of the Antichrist’s entrance into the world.

The faces of people (even spiritual people) prove that these teachings follow one after the other, that they converge with each other. To merge these teachings together, to reconcile God with Belial, is crazy. And not only is it displeasing to God, but it is also blasphemous.

And the Lord, warning about this, said: “Many will come in my name and will say they are Me.” (That is, many people will try to preach like Me.) Do not believe them.

Before the birth of Antichrist in the Russian Church, there will be a Patriarch. Then there will be an 8th Ecumenical Council, the purpose of which is:

That will be the time, says Father Seraphim, when the wickedness of Russian bishops will surpass the wickedness of the Greek bishops who lived during the time of Emperor Theodosius the Younger. (Menaion, Aug. 4, Memory of the Seven Youths of Ephesus)

And the saying will be fulfilled: “These people draw near unto Me with their mouth, and honor Me with their lips; but their hearts are far from Me. But they honor me in vain, teaching the commandments of men.”

For under the pretext of Christian ‘progress’ in the Church, for the sake of the requirements of this world, they will choose and change the dogmas (doctrines) and statutes of the Holy Church, forgetting that these doctrines began with the Lord Jesus Christ Himself, who taught and gave instructions to His disciples, the Holy Apostles, about the creation of Christ’s Church and its rules, and commanded them: “Go teach all nations what I commanded you.” (Matthew 28:19)

From then until now, Christ’s teachings have survived and have been preserved. We have the traditions of the Holy Apostles, which were explained and affirmed repeatedly by the sacred successors to the Apostles, and by the Holy Fathers, led by the Holy Spirit, at the seven Ecumenical Councils. “Woe to the one who adds or subtracts one word,” says Fr. Seraphim. “Our Church has no deficiency.”

Woe to those who dare to make any changes in the Divine Liturgy and the teachings of the Church, which is the Pillar and Foundation of Truth, and of which the Savior said, that even the gates of hell would not prevail against her, that is, that it will remain unchanged until the end – until the second coming. Any desire to amend the rules and teachings of the Holy Church is heresy. The desire to create your own special Church on the basis of reason is a departure from the ordinance of the Holy Spirit, and is a blasphemy against the Holy Spirit which will never be forgiven.

This is what all those who fell away from unity have done and will do with the Holy Apostolic Church. The Apostle Paul spoke about them: “These are false apostles, deceitful workers, making themselves appear as apostles of Christ. And it is no wonder! For Satan himself appears as an Angel of Light. Therefore, it is no great thing if his ministers also appear as ministers of righteousness, whose end will be according to their deeds.” (2 Corinthians 11:13-15)

The bishops of the Russian land and the spirituality of Russia will go in this direction, and the wrath of God will smite them. “Jesus Christ is the same yesterday, today, and forever.” He gave His teachings and commandments once and for all, without change, because this is the truth brought from Heaven by the Son of God Himself.

Science and human teachings should be subject to change and improvement, but the Divine teaching given to us cannot be changed by people. The Lord Himself is unchangeable, and He is the one who established the Holy Church and the sacraments. Therefore, says Fr. Seraphim, there is no place for human reasoning. The Apostle says: “But even if we, or an angel from heaven, preach any other gospel to you than what we have preached to you, let him be accursed.” (Galatians 1:8)

See what Fr. Seraphim often told everyone about what would happen to him: “My bones will be resurrected, and I will go from Sarov to Diveyevo…”

Again, please take this as a form of study and reflection. But considering where the world is heading, to be knowledgeable and aware of the evils that surround us, and being able to recognize manipulation, deception and corruption – is crucial even if we’re not “believers” of God/satan/Bible, etc.

For those, like myself, who are seeking truth, may have found ourselves led to the Truth and saving Grace of Jesus Christ. So if that’s the case, then it would be wise of us to keep praying and studiously staying alert and strengthening our faith and resolve.

Devote yourselves to prayer, being watchful and thankful. And pray for us, too, that God may open a door for our message, so that we may proclaim the mystery of Christ“ – Colossians 4:2-3

Bill Gates: Energy Crisis is ‘Good’ Because Society Will Be Forced to Transition to ‘Clean Energy’