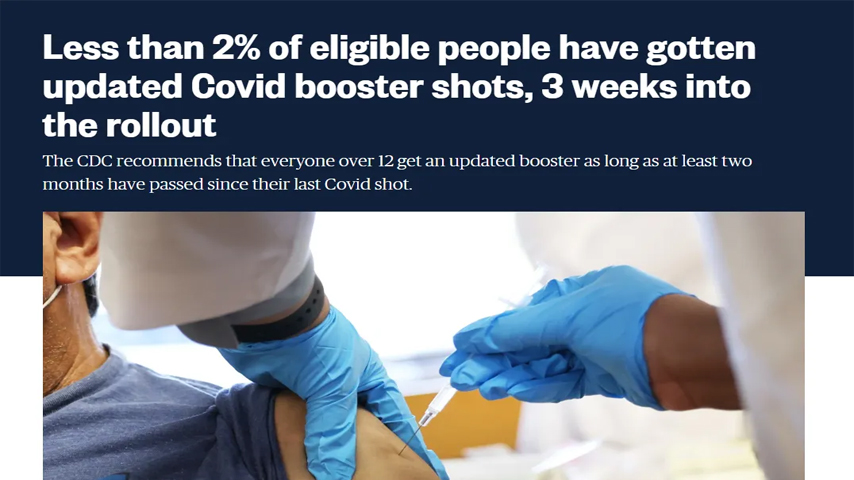 In a bit of good news, the push for never-ending shots is coming to an end, as evidenced by this latest headline from NBC News.

At least 4.4 million people have received an updated Covid booster since the start of the month, according to data released Thursday by the Centers for Disease Control and Prevention. That number represents around 1.5% of people currently eligible to receive the shots in the U.S.

“I would expect a much higher proportion of Americans to have gotten the booster by this point,” he said.

Roberts said a lack of public awareness about the shots or the prevailing narrative that the pandemic is ending might have hindered the vaccine rollout.

“The fact that this booster came out days before Biden said the pandemic is over is a huge mixed message,” he said. “Now it’s going to be that much harder to convince those at risk who are on the fence to get a booster.”

Thanks, Biden. But his comments alone are not responsible.

As of September 14, 2022, only 8% of 6-month to 4-year-olds have received at least one dose of the COVID jab. So clearly and evidently, parents are saying to the government, “not for my child.”

So people had already figured these shots were both dangerous and ineffective. And so, Biden announcing, “The pandemic is over,” is just icing on the cake.

Dr. Naomi Wolf joined Steve Bannon in the War Room to celebrate the beginning of the end of the vaccine agenda.

Steve opined, “What an epic fail [for pharma]. Naomi Wolf, give me your assessment of that.”

I have to, again, credit the War Room posse. I mean, a lot of things happened, right? But I have to note that after Amy Kelly did a series of reports about horrible harms to male sexual health — to put it mystically — suddenly, people began fleeing.

I never can show cause-effect. I never have a smoking gun, but we’ve been doing such comprehensive reporting on damage to women, damage to babies, damaged placentas, and then damage to potency, damage to little boys’ ability to grow into healthy adult males with normal male secondary sex characteristics. And I think when you hear a story like that, or if it gets through at all, you’re like, “Okay, I’m gonna pass on that booster.”