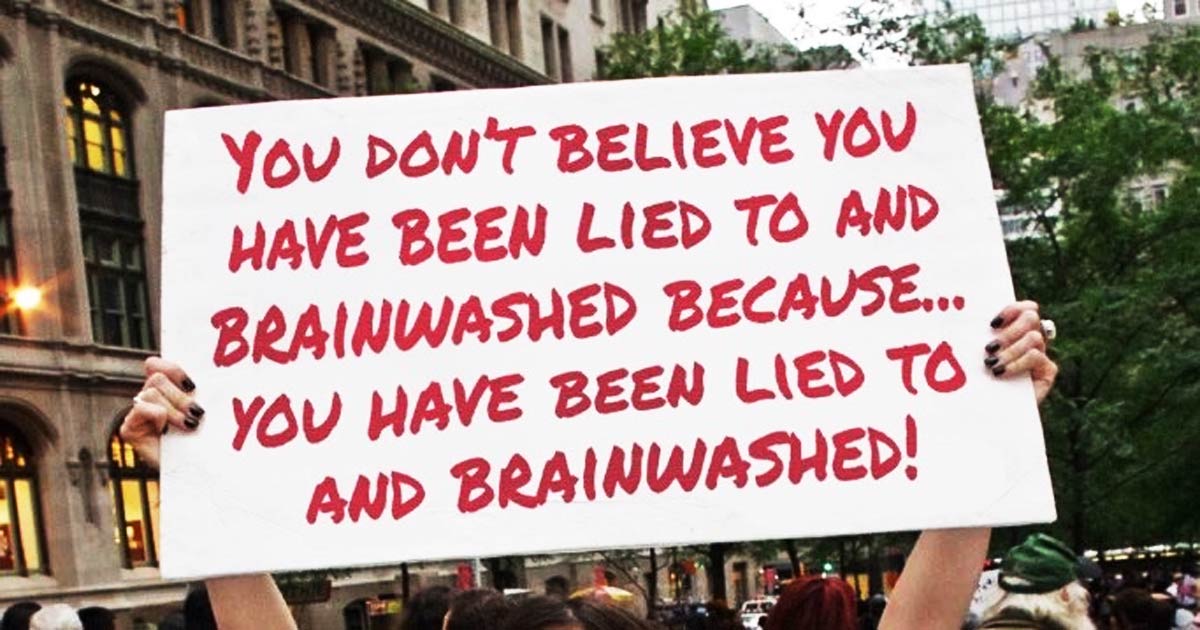 “These are people that are not maturing; they are not learning their lessons and they have no skill set to grow with. They’re duds, and it’s hard for us to watch because these duds are murdering their own children, these duds are destroying our society right in front of us….”

Disclaimer– I prefer to see these people as conformist unthinking dupes rather than mentally ill. But I post this because it’s the kind of over-the-top propaganda we get. (Eg. Betty Friedan compared homemakers to concentration camp inmates.”) So here’s one back!

Amanda Vollmer,  a doctor of Naturopathic Medicine has the clearest and relevant expression of what is going on. it’s very popular on Bitchute. It’s the best expression I have heard yet. What we are seeing is directly in line with the works of the very famous literary G.K. Chesterton, in the 1950s and what Ted Gundersen, ex FBI head in L.A. came out in the early 2000s regarding the satanic abuse of children. Don’t listen to gatekeepers like Jordan Peterson who writes this evil off as nonsense in his interview with Bari Weiss.

Listen to her message:

“I’m gearing my message toward those who are not been swept up by the psychological operation that’s been underway, not just this year with the plandemic, but also for years and years building to this moment in time to help you feel better about the fact that people have slowly had their minds altered over decades, really decades.

It’s not something that’s happened overnight and it’s something that has been planted quite deeply. To help people wake up out of their deep deep hypnosis and it is hypnosis, I would suggest you study a few things, Larken Rose’s “A Candle In The Dark.”

The deeply mind controlled are locked inside of themselves to the point where if they see anything – other information that doesn’t fit with the narrative they have been sold, all they have is to delete you or mock you…these people are like in a mental asylum. They might look like they are functioning, running their jobs, having children, they are going through the motions but they are mentally very very sick people. They will project this onto you and say that you are crazy and you are mentally ill. This is classically what happens with narcissists and people with severe personality disorders.”

“Now imagine that they grew up with illusions, like vaccines are safe,…like you catch bugs through the air, or that everything is caused by a virus or a genetic issue or the doctor is God and you should just listen to them…. the government is good for you, all of these lies they believe their whole life and they are very clever in their mental illness to ensure throughout their lives that none of the (true) information gets in.

Any contradictory information- they will immediately dismiss it, they will never entertain the other side..they will always come first with the illusion and this is why the psyop now has worked so well on them. This is why they are boasting, so proud of their behaviors, that they are good little citizen-slaves, good little robots, they don’t question anything that comes out of the government, don’t question medical doctors, they have been trained to be obedient slaves, they will never ascend, they will never ever have their souls saved, they are lost, they are God lost sheep; that’s who they are; they’re arrogant and they are full of themselves…and they are shallow; they are empty. There is nothing of depth inside of them…”

“These duds are going along with tyrannical behaviors of corrupt institutions that have been long held by essentially “Free” Masons” and those above “Free” Masons and they don’t even know what that is… This is how lost and gone these empty shells are, and it’s very very sad but unfortunately, they have had many opportunities to awaken and many opportunities to learn something else along the way,…. these individuals chose to remain ignorant…as if they were saving life itself. Do you see how demented they are? how they are so warped in their thinking? They are literally jumping off a cliff…. and squealing with glee as if they are saving all of us. This is how mentally ill these people are..”

It’s ultimately on them, however, they are too stupid, too gone to even know what they are doing, so forgive them, they know not what they do, and we let them go and when they die in the fall … we will have less of the brainwashed masses to contend with, but what this means for us is that the illusion will be spun yet again, and they will try to make it our fault. 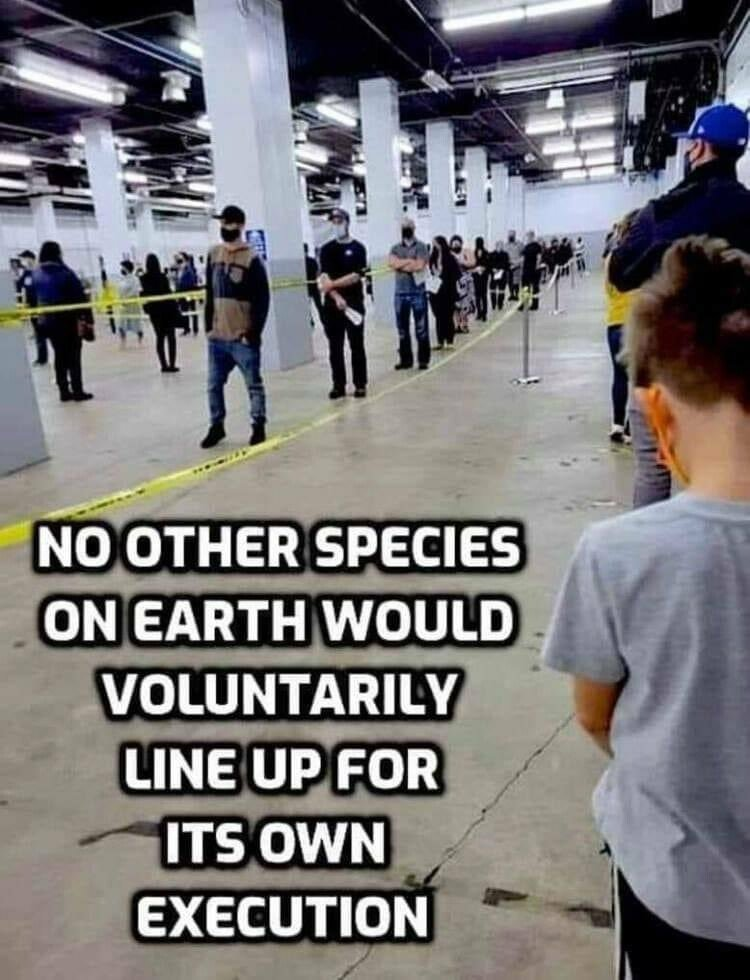 “This is the Zombie Apocalypse. Do zombies know they are Zombies? Of course not”…

“They have manufactured consent for hundreds of years…”

The video continues for another 11 minutes, see The Cult of Shadow

I thought maybe everyone was just being compliant to try and win a free trip to Jeffrey Epstein’s Island to maybe get a chance to sip Mai-Tia’s and sample children with Epstein and Kevin Spacey, but I think she is right – to an extent. (If you think Epstein is really dead, I have a bridge for sale) There are others with children and jobs they depend on, what can they do? What advice can anyone give these parents of small children?

Sitting there eating my lunch yesterday, a truck stop in Southern Illinois, listening to three black ladies jabber.  One said, two isn’t enough, now they said we have to have three pokes.
Long silence.   Then one said, Gawd Almighty, are they trying to kill us?
Long silence.  One said, what are we gonna do?  I have to work.
Long silence.  Change topic.
They aren’t mentally ill.  They are being squeezed pretty hard, and are too submissive.
Naturopath Doctor Amanda has no idea how hard it is to be poor.

Thank you so much for posting Amanda Vollmer –she hits the nail on the head for us, who are aware, awake, and can face the ugly truth.  She gives solace to our souls as we watch helplessly as our loved ones –mind-controlled joyously commit suicide –thinking they are heroes saving the world –rolling up a sleeve –spitting angrily at us for not doing our part to descend into their deluded “save the world nonsense”

But when I really press these ‘walking dead”  and ask them to consider “what if” it kills you ?  They demonically laugh and say that they want to die –they hate their lives –they say “well we all gotta go sometime.”   I’m ready to die to save the world …..

These hopeless people –had to have somewhere contemplated deep in their souls– that the vax could kill them and yet they readily have chosen to die.  It is a cult of death.

They are not of us. God warned us about the last days to come and told us how to deal with these people …

Mark 13:12 And brother will deliver brother over to death, and the father his child, and children will rise against parents and have them put to death (via vaxx)

2 Tim 3:1 To understand this, that in the last days there will come times of difficulty. For people will be lovers of self, lovers of money, proud, arrogant, abusive, disobedient to their parents, ungrateful, unholy, heartless, unappeasable, slanderous, without self-control, brutal, not loving good, treacherous, reckless, swollen with conceit, lovers of pleasure rather than lovers of God, having the appearance of godliness, but denying its power. Avoid such people.

The DDS Players get us nodding Yes! Yes ! and then they slip in a comment — a little word or two –that will totally undo us.

At about the 13:13 time mark, Ms. Vollmer discredits the “Shedding” phenomenon of the COVID Vaccinated.  However, there are numerous animal studies and doctors, and others who have confirmed that the Shedding is real — Keep your DISTANCE from COVID Vaccinated people.

Why are Hospitals Firing Staff During a Pandemic?