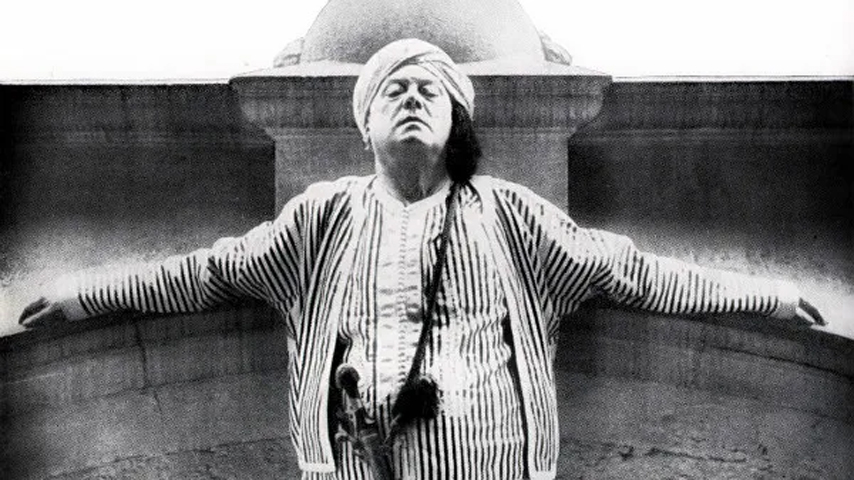 Aleister Crowley (1875-1947) epitomized the worst excesses of the English elite aristocracy. He received inherited wealth worth about $20 million in current dollars and never worked a day in his life. He became one of the most self-absorbed, narcissistic, psychopathic people on the planet.

Crowley is said to have had a very high IQ and perverse curiosity that manifested itself in childhood when he admittedly killed a cat to experiment on the nine-lives theory. Crowley described his Quaker parents as strict, hyper-religious and abusive. This is shades of Israel Keyes among others.

When they sent him away to boarding school for being a rebellious teen, he was introduced to the English elite tradition of buggery and sodomy. He was an extremely promiscuous bisexual and a sadist from the get-go. Especially later in his satanic-occult life experimentation- sadism, sodomy, drugs and sex magick was all he was about.

He was widely traveled in his younger years and lived largely. He risked life and limb as a mountain climber, spending time at high altitudes. Like many British elites, he immersed himself in secret societies and occultism. He never rubbed shoulders with “little people” but rather surrounded himself with like-minded upper-class perverts, chosenites, and edgy types. One of them at one point was likely Pauline Pierce, the mother of Barbara Bush. It’s a big club and you ain’t in it.

The Uncanny Resemblance of Barbara Bush to Aleister Crowley

He was heavy into opium, morphine and narcotics. While on his estate at Loch Ness, Scotland, he enjoyed terrorizing and creating difficulties for the local village people.

The idea behind his new age of Horus religion of Crowleyanity was expressed in his book “Liber 77” in which he said that “slaves shall serve.” Like his buddy Aldous Huxley, Crowley felt this was best accomplished by getting rid of morality, the use of terror and pulling the wool over people’s eyes- aka black magic.

Satanic elites felt that morality and the concept of right and wrong were used by weaker people as an effective defense. In fact, an inversion of good and evil could be used to set up a predatory system of enslavement. The advantage gained over the good but weaker people is their belief and misplaced trust in the bogus Hanlon’s Razor: “Do not attribute to malice what can be explained by stupidity.” Nonsense. Good-but-weaker-willed people simply can’t comprehend that satanist-influenced predators are running amok, because they don’t think on a predatory level or fully understand and detect evil.

Additionally and similar to Anton Lavey, Crowley pushed the notion of shaping reality through alchemy. Alchemy is taking opposites and flipping them, also known as lying and conjuring — a practice we reveal and expose non-stop on these pages. Crowley would get a hold of people open to suggestion and, in the manner of a cult leader, would get them to drink animal blood; cut themselves with a razor in so-called “rituals”; submit to being sodomized, and, in one case in Sicily in 1922, to die. This stunt is described starting at minute 1:42:30 in the video documentary below.

Crowley predicted — and one could argue that he is right — that one day, “the world would bask in the sunset of Crowleyanity.”

He has had an influence on numerous modern icons and personalities, ranging from Timothy Leary to L. Ron Hubbard and Aldus Huxley. Crowley was a 33-degree Freemason and borrowed liberally from that society.

I submit that the behaviors, personalities and cast of characters described in the following documentary are part and parcel of elite satanic Britain (and elsewhere) to this day and explain a lot about the Crime Syndicate’s role in the world. The voice and manner of Crowley, rendered by Thomas Bewley, deserves a theatrical award.

A good example of in-your-face Crowleyian black-magic conjuring and pulling the wool over people’s eyes was seen at the staged deception Toronto “van-nado” attack. The corrupt media put forth two photos (below) of the perp. The one from the Toronto Sun shows the chrome dome “Alek Minassian” being arrested. Then, NBC “news” shows a sketch of him in court the next morning with a full head of hair. The idea of this deliberate nothing-to-see-here, move-along enslavement spell is to get you to deny your lyin’ eyes and do it often.

Notes on Critical and Magical Thinking

The following exchange with wags on Reddit illustrates that stark evidence is a moving goalpost for some. After being shown the image sketch of Minassian in court the next morning, “exHeavyHippie” argues there are two days in between the two images as though one or two days even mattered for baldness. He then moves the goal-post distraction to the face, not the bald head. He then claims to be an “expert” on shaving, as if most of the males reading don’t shave or have a lifetime reference point. He asks if a courtroom artist can even sketch a bald head. Huh?

The commenter duo is point-blank telling you to accept bizarre black magical interpretations. This is a prime example of Crowleyanity. When you encounter this as often as I do, you come to recognize the Crowleyian sense of projected but inverted superiority.

I am glad I was universally banned at Reddit, and no longer participate in these conversations. You will notice my handle clovize has been completely scrubbed of articles and comments – but not exHeavyHippie. This happened far too often to be random or coincidence. At this stage, r/conspiracy has been rendered nearly worthless, and what’s left will likely be quarantined. I keep Winter Watch comments Crowleyanity dark occult free as much as possible. They now seem to avoid coming here, although we could always be swarmed at some point.

“Zombie Dave” then nicely dispenses with this mental gaming. Both his sarcastic handle and his back-handed compliment is a fairly effective tactic against inverted, satanic conjuring.

“As someone who shaved somewhat daily for years I assure you two days of growth on a clean shaved head is significant.”

You’re trying, and that’s the main thing. Just curious but are there bonuses for creativity?

We aren’t in Kansas anymore. Indeed, in his 1904 “Book of the Laws” are some passages that are most chilling. “And my number is 9 by the foals. My number is 11, as all their numbers, who are of us.” Coinkydink, nothing to see here, move along?

In the last video below, William Ramsey and Tim Kelly discuss the “Children of the Beast” impact of Crowley on modernity.