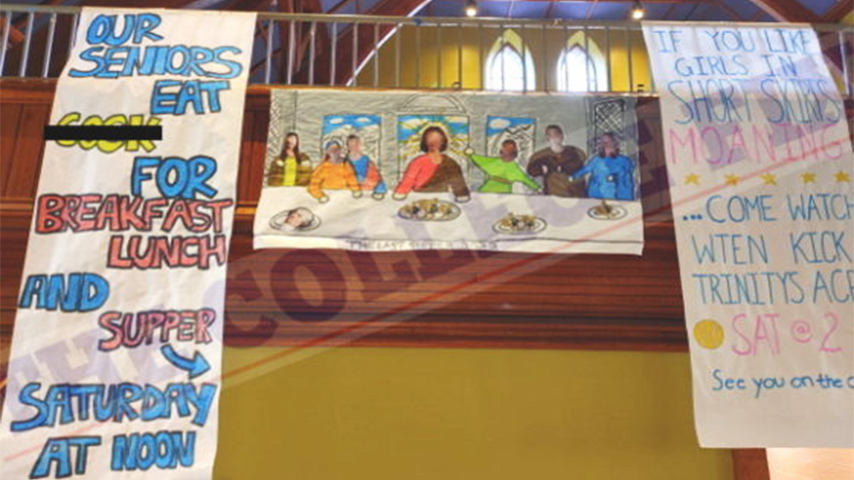 A series of jokes and banners published and hung at Hamilton College recently has upset some observers who argue anti-Christian sentiments fester at the small, New York-based private liberal arts institution.

Knowing this first, that there shall come in the last days scoffers, walking after their own lusts

And saying, Where is the promise of his coming? for since the fathers fell asleep, all things continue as they were from the beginning of the creation. 2 Peter 3:3-4

Most recently, a student satire publication called the Duel Observer published a mock article on campus newsstands during Holy Week that replaced Jesus Christ’s blood with his ejaculate then joked “it will still give us everlasting life.”

The satire piece ends with a description of an explosion that destroys the “Rosary Club,” the name of a real student group on campus.

On Tuesday, student-athletes also hung a banner (pictured) in the dining hall advertising an upcoming tennis match that was used for inspiration for the Last Supper mural by Leonardo da Vinci.

The banner asks the campus if it likes eating “cock” for supper, possibly a reference to the rival team’s mascot, and appears to overlay images of student-athletes and the coach in the place of the apostles and Jesus. 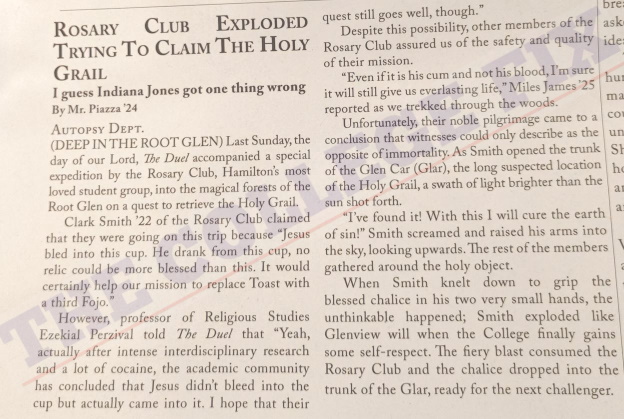 The Hamilton College student who provided the images to The College Fix is Devin Mendelson, 22, a senior at the school who founded the Rosary Club last November.

Mendelson said his club has upset some of his peers and campus leaders because of its strong defense of the unborn and traditional marriage. Administrators suspended his club’s email account for nearly three weeks in March, he said.

Reached by telephone Thursday, the college’s Senior Director of Media Relations Vige Barrie declined to comment to The College Fix. The Duel Observer also did not respond to an emailed request for comment.

Mendelson points to another piece in the Observer headlined: “Things That Are More Powerful than the Most Holy Rosary of the Blessed Virgin Mary,” which specifically called out the Rosary Club. 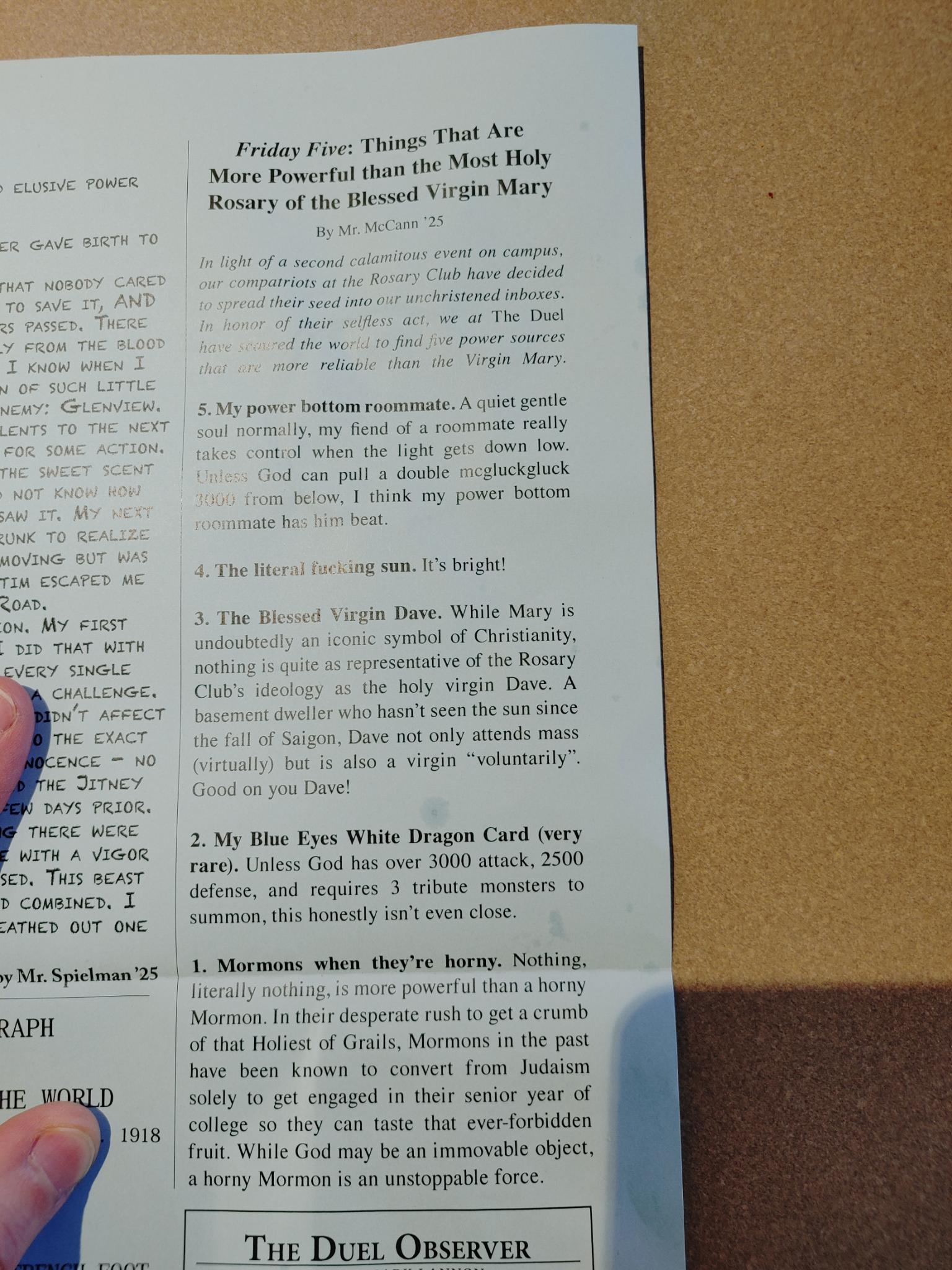 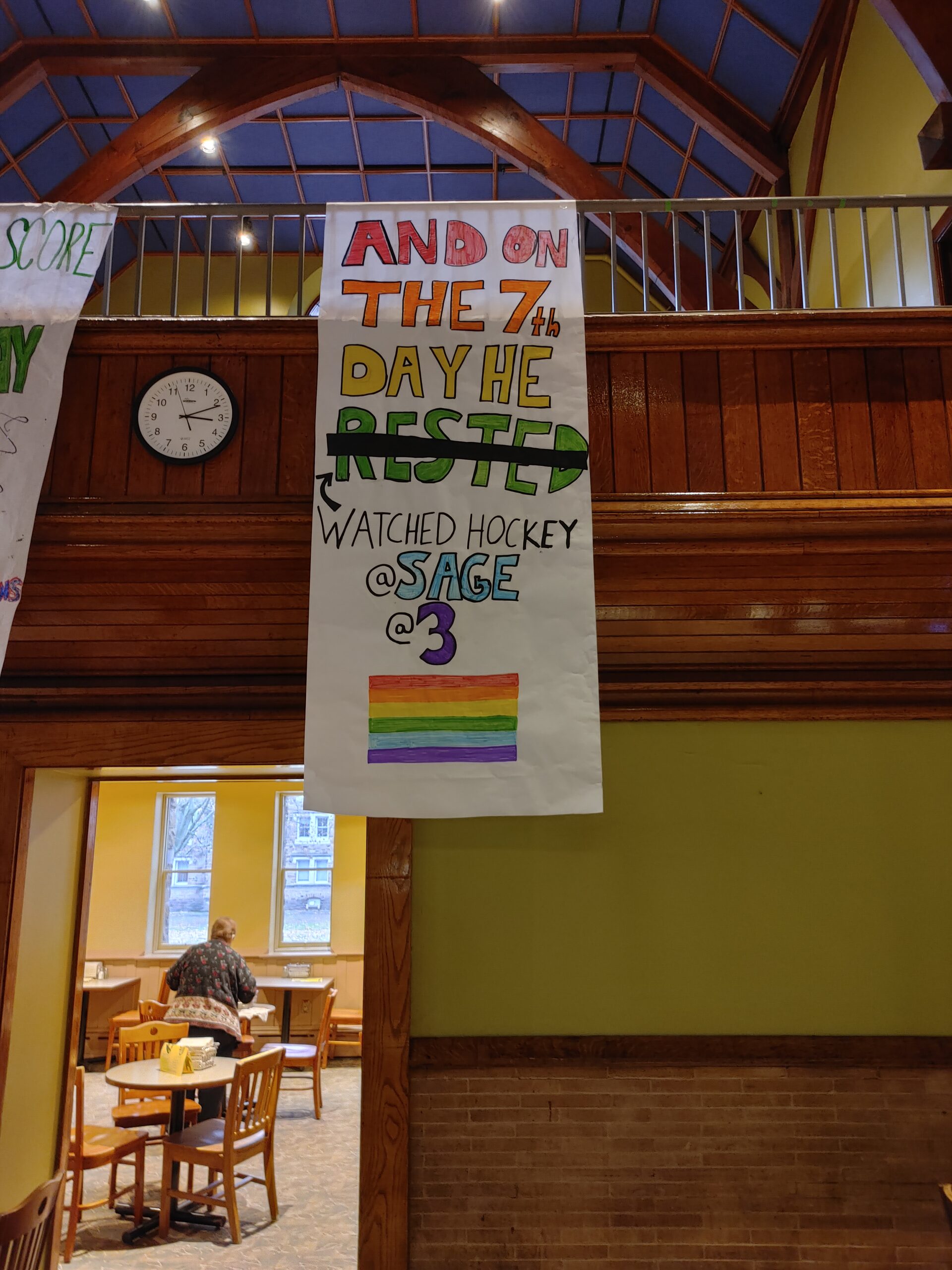 Mendelson told The College Fix his peers have boasted that his club has inspired someone to donate to Planned Parenthood and that anonymous students have also signed up the Rosary Club’s email account to the mailing lists of several sex shops, Planned Parenthood and even a Satanic group. He takes screenshots to “keep the receipts” and then blocks them.

He said he has not filed an official harassment complaint with the school, and that he can handle the mocking. But, he added, the latest satire piece in the Observer is “the most offensive thing imaginable.”

Mendelson spelled out his side of the story in a piece for Enquiry, published by the Alexander Hamilton Institute for the Study of Western Civilization. He told The Fix it came out before he became aware of the satire piece on Jesus and the Last Supper banner, the latter of which, he added, was taken down a few hours after he took a picture of it Tuesday.

“At the same time that these things are allowed or not addressed, the Rosary Club must fight a tedious bureaucratic battle simply to exist. Our last event before spring break, dedicated to praying for the restoration of authentic love between men and women, received backlash from the mob merely for not including relationships that the Church teaches are sinful and a certain view of the ‘gender spectrum.’ This is part of what prompted the director of student activities to disable the Rosary Club email account a couple of days later (it was only recently reinstated),” he wrote in his op-ed.

“… Meanwhile, students of traditional faith are subjected to not one or two, (three, four) but five emails pertaining to a ‘Bob the Drag Queen’ event – just one of many examples of events offensive to their religious beliefs that pious students are subjected to by officially authorized campus emails. Not to mention the posters for such events across campus. If students of faith ever dared to speak out against any of it, we all know they would be faced with a ‘hate crime’ investigation and probably be punished for it.”

Robert Paquette, president of the Alexander Hamilton Institute, said in an interview with The College Fix that the various items Mendelson highlighted are “disturbing to say the least.”

“Never would this kind of imagery be tolerated if it were directed at Muslims, gays, transgenders, or feminists.”

Paquette said what Mendelson and his club have faced is troubling.

“This young man on campus is trying to start a Rosary Club and this has brought out the woke activists in abundance,” he said. “They have become gross and insulting, and they appear to want to defeat the young man’s purpose, and the administration does not seem to be doing much about it.”

Paquette taught history at Hamilton for almost 40 years, but quit in 2018 to work at the Hamilton Institute full-time.

“I’d had enough with the leftward lurch of Hamilton College,” he said.

Paquette also knows what it’s like to be roasted by the Duel Observer. He provided The College Fix with an issue from 2013 in which students mocked the former professor for defending intellectual diversity.

Mendelson, for his part, said he’s not done fighting for his Rosary Club, nor for the heart and soul of his campus, likening the situation to spiritual warfare. The club has met to say the rosary in the campus chapel about eight times since November, drawing anywhere from three to seven students each time.

Hamilton College has an undergrad enrollment of 1,800 and its annual tuition and fees are about $60,000.

Abortionist: ‘It Makes My Day’ When I See A Woman Come Back For Another Abortion