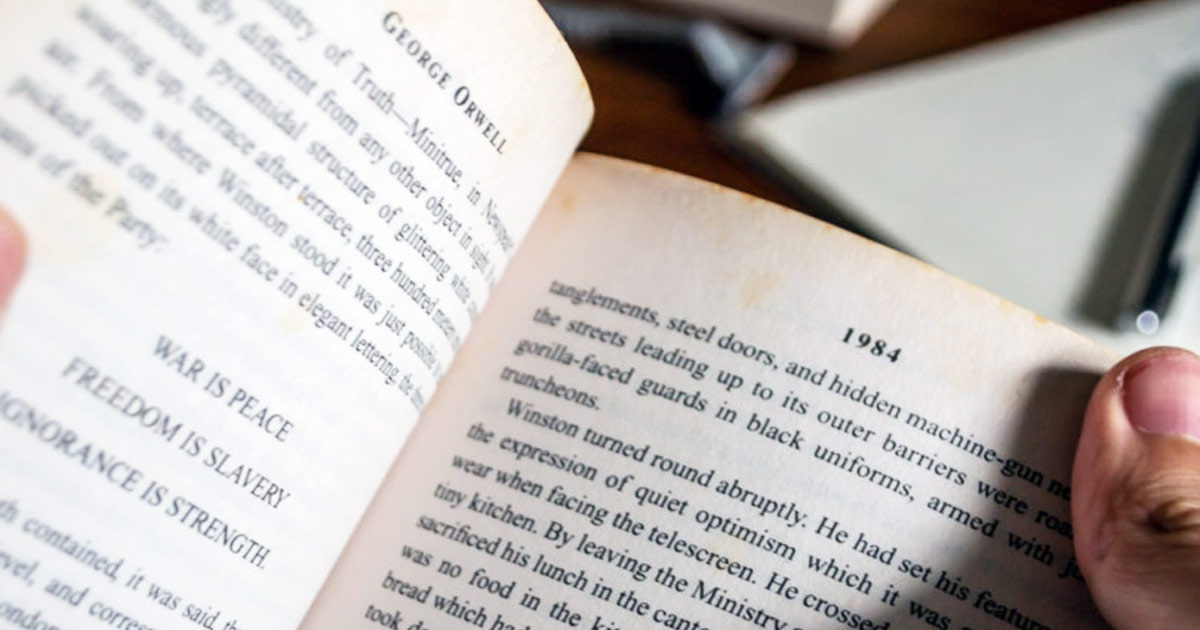 The deployment of clever linguistic tricks has created a hostile upside-down universe, where even the vaccine-injured are tarnished as ‘anti-vaxxers’ or liars rather than acknowledged as ex-vaxxers who took risks that turned out to be life-changing.

(Children’s Health Defense) – Psychological and linguistic manipulation are, for those in power, proven tools for building, consolidating and maintaining dominance — a reality keenly depicted in George Orwell’s never-more-relevant novel, “1984.”

As phrased by master propagandist Edward Bernays, an approximate contemporary of Orwell’s, the mind of the people “is made up for it by the group leaders in whom it believes and by those persons who understand the manipulation of public opinion.”

Recent events surrounding COVID vaccines have shown that medicine and public health — with the help of a complicit media — are particularly skilled at “pull[ing] the wires which control the public mind.”

The clever bag of linguistic tricks deployed by the medical cartel includes seeding evocative terms such as “vaccine hesitancy” and “lockdowns” (which is prison terminology) into popular and scientific discourse, forging slippery new definitions of words with formerly fixed meanings (such as “pandemic,” “herd immunity” and “vaccine”), and circling failed products back around by giving them the positive spin of “boosters.”

Ominously, medicine’s and public health’s verbal assaults encourage shaming of, or violence against, those who ask questions, while upholding the disingenuous pretense that vaccine mandates are compatible with freedom.

In this hostile upside-down universe, even the vaccine-injured are tarnished as “anti-vaxxers” or liars rather than acknowledged as ex-vaxxers who took risks that turned out to be life-changing.

One of the more insulting recent examples of linguistic weaponization involves a dubious psychiatric cover term, “functional neurological disorder” (FND), that is suddenly being trumpeted as an explanation for the tsunami of adverse events — especially severe neurological reactions — being reported all over the world in the aftermath of COVID vaccination.

Psychiatrists conveniently define FND — which they also refer to as a “psychogenic” (originating in the mind) or “conversion” disorder — as “real” nervous system symptoms that “cause significant distress or problems functioning” but are “incompatible with” or “can’t be explained by” recognized neurological diseases or other medical conditions.

Lest members of the public derive a “simplistic impression of potential links between the [COVID] vaccine and major neurological symptoms,” neurologists pushing the FND story have hastened to reassure people that the “close development of functional motor symptoms after the vaccine does not implicate the vaccine as the cause of those symptoms.”

One of these individuals is National Institutes of Health-funded neurologist Alberto Espay, who implausibly adds that COVID vaccination (which entails injection with high-risk substances and technologies) is just “a stressor or precipitant, much like any other stressor … such as a motor vehicle accident or sleep deprivation.”

Officials and the media are audaciously trotting out the FND narrative on both sides of the pond, as evidenced by a recent Daily Mail headline that read, “Videos of people ‘struggling to walk’ after getting their COVID vaccine are NOT result of jab itself but a condition triggered by stress or trauma.”

Helping with the spin, a member of the U.K.’s Joint Committee on Vaccination and Immunization straight-facedly attributed this “stress” to coercion, stating: “If people begin to feel they are being kind of force against their will to do something, then in a sense that’s quite a damaging thing to do because it gives people the impression vaccination is something being imposed on them.”

Hammering home the point that “there is nothing to see here,” Kings College London physician Matthew Butler solemnly (and without evidence) agrees that FND — though “serious and debilitating” — “does not implicate any vaccine constituents and should not hamper ongoing vaccination efforts.”

Butler is the lead author of a May 2020 paper proposing FND patients’ “abnormal body-focused attention” be treated with psychedelics such as LSD and psilocybin — never mind that psychedelics themselves, admit Butler and co-authors, “sometimes produce abnormal physical and motor effects,” including seizures.

To past victims of vaccine injury, the “it’s all in your mind” sleight-of-hand being summoned to dismiss COVID vaccine injuries is all too familiar.

In more recent decades, families affected by autism have experienced the double whammy of regulatory indifference to likely culprits (including not just neurotoxic vaccines but other probable environmental triggers) alongside brazen denial of autism’s escalating prevalence.

Young people injured by human papillomavirus (HPV) vaccines tell similar stories of “denial and dismissal of reported harms and deaths.” Researchers who in 2017 reviewed the serious adverse events reported during two of the largest HPV vaccine clinical trials noted that “Practically, none of the serious adverse events occurring in any arm of both studies were judged [by the manufacturers] to have been vaccine-related.”

In the face of severe symptoms such as heart-attack-like chest pain, numbness and swelling of extremities, hair loss, whole-body aches and extreme fatigue, boys and girls injured by HPV vaccines have been repeatedly subjected to medical gaslighting — told they are “crazy” and just need to “slow down.”

In one incident in Australia, after “26 girls presented to the school’s sick bay with symptoms including dizziness, syncope [fainting] and neurological complaints” within two hours of receiving HPV vaccines at school, pharma-funded researchers had the chutzpah to dismiss the safety signal and characterize the episode as a “mass psychogenic event” — which they defined as “the collective occurrence of a constellation of symptoms suggestive of organic illness but without an identified cause in a group of people with shared beliefs about the cause.”

The medical-public health-pharma cartel, the “small cabal of wealthy countries, corporations and individuals” that support it, and their media mouthpieces are supremely confident in their ability to manage public perceptions through words and narratives, whether for the purpose of “mystifying” the public about key events, securing buy-in for oppressive policies or sowing discord to divide and conquer. (As journalists Caitlin Johnstone and Glenn Greenwald also remind us, many media personalities are intelligence agency veterans or assets, and the “sole owner of the Washington Post is a CIA contractor.”)

Thus, it pays to be attentive to how health authorities use language, for “the more you know about language, the more immune you become to its effects.”

Beyond noticing the manipulation, we must also stop ceding the linguistic terrain to our would-be manipulators — for example, by eschewing weaponized vocabulary such as the pejorative term “vaccine hesitancy.”

Catholic journalist Jane Stannus points out that the term “vaccine hesitant” portrays those who decline COVID (or other) vaccines as “‘trapped by irrational fears’ in a state of inaction or ignorantly opposed to science,” with the strong suggestion “that such backward and weak-minded persons are worthy of contempt, especially compared with the enlightened, confident people who signed up for the vaccine immediately.”

The unfortunate corollary of such language is the “witch hunt on the unvaccinated” that we are already witnessing, “an act of violence against the fabric of society,” says Stannus, that is “a greater evil … than the shared suffering of disease.”

We can and urgently need to see through these shenanigans and reclaim our humanity.

Fast-moving current events are proving those who have declined COVID injections are the wise ones, with science proving them correct in just about every way.

Whether we consider the many suspected dangers of products unleashed on the public less than a year ago, or the injuries and deaths occurring on a never-before-seen scale (including in teens who had their lives ahead of them), or the clear superiority of natural immunity, or the fact that the injections don’t even do the one thing the clinical trials alleged they could do (i.e., keep more severe illness at bay), it is clear that citizens who would rather think for themselves than swallow prefabricated lies are the ones who are going to come out ahead.

With globalist puppets in control of every Western nation, brace yourself for their next diabolical move: The weaponization of food