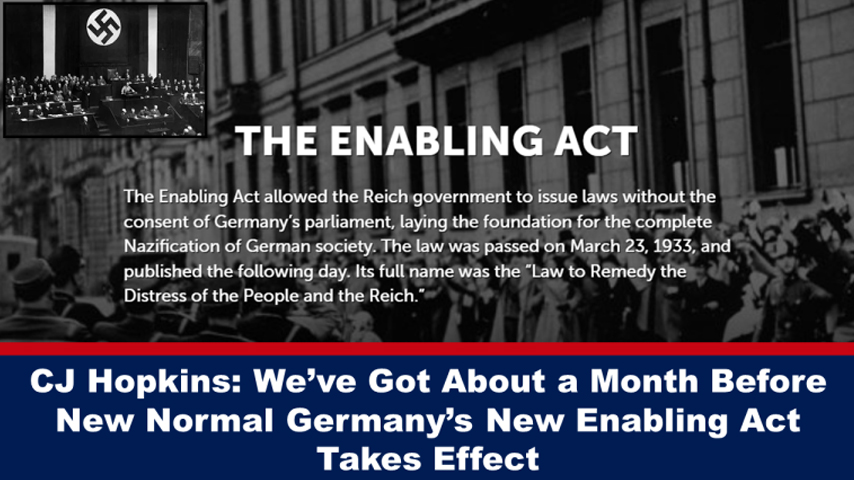 These “emergency measures” are purportedly designed to protect the German people from a “health threat” that:

For example, Karl Lauterbach (who is still for some reason the official Minister of Health of Germany, despite the fact that he has been lying to the public and fomenting hatred of “the Unvaccinated” like the reanimated corpse of Joseph Goebbels on a daily basis for over two years) explained why Germany is pushing ahead with its plan to coercively “vaccinate” the entire population, over and over.

According to Lauterbach, the “vaccines” cause “multiply-vaccinated” persons to develop symptoms of the illness their multiple “vaccinations” were designed to keep them from being infected with more quickly than “the Unvaccinated,” so they stay home, and thus help to “limit the pandemic,” whereas “the Unvaccinated,” being “asymptomatic,” go around heedlessly infecting “the Vaccinated,” which they wouldn’t be doing if they had been “multiply-vaccinated,” as they would be home suffering the flu-like symptoms they were assured the “vaccines” would protect them from suffering but which actually caused them to suffer more quickly.

Apparently we're at the "just making shit up" stage https://t.co/FqKO0PUgEW

OK, at this point, I know you’re probably asking, “why haven’t the German people demanded the removal of this obviously deranged clown from office?”

Well, unfortunately, the problem isn’t just Karl Lauterbach. It’s also Olaf Scholz, the Chancellor of Germany, Marco Buschmann, the Minister of Justice, and the rest of the government of New Normal Germany, and the vast majority of the German people, who appear to be willing to behave as if the rest of the world did not exist, and click heels and mindlessly follow orders, no matter how completely absurd.

For example, if you’re flying to New Normal Germany from some other country where reality prevails, the moment your plane enters German airspace, you are required to don a medical-looking mask, and not just any old medical-looking mask, but an FFP2 Filtering Face Piece as defined by the EN 149 standard, which has been proven to protect you from the BA.5 Variant of the Omicron Variant of the SARS CoV-2 Variant (i.e., the original Covid-19 Variant) by the “the Golden Syrian Hamster Model,” according to the New Normal German authorities.**

Of course, this Filtering Face Piece mandate does not apply to government officials and their mouthpieces in the German media, an entire planeload of whom just flew from New Normal Germany to New Normal Canada and back in a state of flagrant masklessness.

For non-German speakers, the story is… everyone is forced to wear masks (i.e., obedience symbols) on all flights in and out of Germany. Government and media VIPs got caught flouting the rules. So now the media are condescendingly "explaining" why the rules don't apply to them. pic.twitter.com/WlRnIxqQQZ

And that is just one of the numerous examples of the fascistic spirit that has taken hold of the country I willingly emigrated to almost exactly 18 years ago, which I now no longer recognise. Here’s another one, which will turn your stomach. It’s a video clip of a Deutsche Bahn Gestapo Officer (a newly created official position formerly known as “train conductor”) barking orders at a maskless woman, over and over, like in a Spielberg film, then finally physically assaulting the woman …

I think that will suffice in terms of examples of the atmosphere here in New Normal Germany.

Now, believe it or not, I have tried to give the German people the benefit of the doubt (i.e., as a people) during the last two and a half years. Sure, I have occasionally likened their behaviour to the behaviour of the German people during their unsavoury (i.e., Nazi) past, and I have compared the evolution of New Normal Germany to the early days of Nazi Germany on … OK, more than a few occasions, but I have emphasised that this disturbingly fascistic, mindless, order-following behaviour has nothing to do with the German character per se, because we’ve seen the identical disturbingly fascistic, mindless, order-following behaviour erupt in countries all over the world, but, at this point, if the German people continue to behave in a disturbingly fascistic, mindless, order-following manner while people all throughout the rest of the world go about their daily lives without having to show their “vaccination papers” to some goon to be allowed to enter a café and get a fucking cup of coffee, and otherwise exist in a more or less maskless, post-mass-hysterically-paranoid state … if the Germans are willing to continue to do that (i.e., behave in the aforementioned mindlessly fascistic, authority-worshiping, frightening fashion and make themselves the laughing stock of the world), I’m not going to be so nice anymore. I’m going to call them some derogatory names. I’m going to question their character as a people. I’m going to publicly speculate about exactly what the fuck is wrong with them.

I hope and pray I don’t have to do that. We’ve got about a month before the new “restrictions” take effect. Which is plenty of time for the German people to rise up and put an end to all this. I’ve been assured by my German friends that the German people will not do this, but what can I say? I’m a hopeless optimist.

In any event, I’ll keep you posted … unless, of course, I get arrested for “delegitimising the democratic state” or “relativising the Holocaust,” or whatever.

In the meantime, enjoy the end of Summer, and don’t worry too much about what’s happening here in New Normal Germany, or in New Normal Canada, or New Normal Washington DC, or wherever. It’s all over now, mostly, isn’t it, the whole New Normal nightmare, right? They would never, ever, do it again … not wherever you live, right?

CJ Hopkins is an award-winning playwright, novelist, and political satirist.  His political satire and commentary have been published by Consent Factory, OffGuardian, ZeroHedge, ColdType, Rubikon, RT.com, CounterPunch, Dissident Voice, and many other publications, and have been widely translated.

The above is an article authored by CJ Hopkins titled ‘New Normal Germany’s Geisterfahrer Geist’. You can find more articles by CJ Hopkins and subscribe to his Substack HERE.

Ukraine in the time of Covid