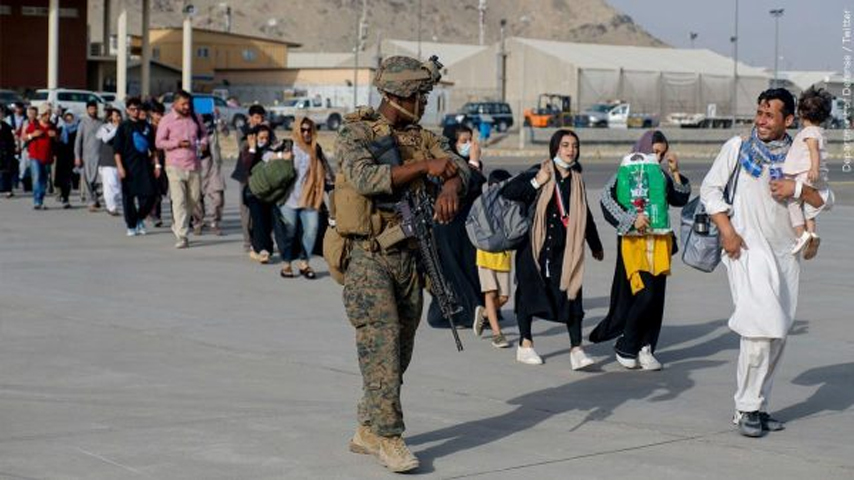 There is new evidence of how the Biden Administration’s total disregard for reality evident in its blundering its way into war with Russia has severely damaged what once used to be referred to as national security. And while the White House and its media barking dogs continue to push the false argument that Russia’s intervention in Ukraine is somehow a threat to the United States, many thousands of illegal immigrants and alleged political refugees continue to enter the country under the radar without any serious attempt being made to determine if the flood of new arrivals is in any way beneficial.

This flow of illegals will undoubtedly increase dramatically with the fighting in Ukraine, which will produce the usual wave of refugees, most of whom will likely be Jewish based on the reality of who has power in Washington DC and will be able to influence the selection process. British Prime Minister Boris Johnson has already declared that his country is prepared to welcome thousands of Ukrainian refugees and he has predictably appointed a Jewish former Member of Parliament as a government minister to lead the effort. Appointee Richard Harrington is also a former head of Conservative Friends of Israel.

There have been reports that claim Ukrainians, aided by charities in the US, are already heading towards Mexico in significant numbers, buying up cheap used cars and heading north to the border to claim asylum. As this development continues and accelerates, the shifting demographics which have already changed the character of the nation will almost certainly do more damage to the economy and the cultural and political cohesion of the United States.

Entry by illegal immigrants into the United States has doubled in the past year and it is estimated that nearly 47 million US residents, 14.2% of the total population of the country, are now foreign-born, the highest percentage in the past 112 years. As many are illegals and are not on a path to eventual citizenship, the Democratic Party policies have sought to empower them by relaxing voting requirements at state levels, meaning that the potential for fraudulent voting will be enormous. As expected, the White House and Congress use a euphemism to explain their position, calling it “voting rights,” which it most definitely is not. In some cases, the Democrats are pushing for an illegal extension of the voting franchise. New York City, for example, has already declared that it will allow non-citizens to vote in local elections.

The Biden Administration has systematically ignored and has challenged court rulings requiring asylum seekers along the southern border to remain in Mexico while their cases are being reviewed and it has even been using taxpayer money to aid in the transporting of the illegals to cities like San Antonio, from which point they are put on planes and buses and moved to other parts of the country where they disappear into the local immigrant population. Mexico, for its part, has ignored agreements failed to implement agreements intended to slow the flow of potential immigrants through its territory.

The Border Patrol has reported over two million “encounters” with illegal immigrants in the past year, with a likely half-million more who entered the country without being detected. Deportations of the illegals have declined precipitously under orders from Washington. In January alone, 62,573 illegal immigrants were “released” by the Administration and administratively allowed to enter the US, more than were released in all of 2021, so the trend is to develop something like an open border in the south of the country. US Border Patrol personnel who object to what is going on are themselves frequently punished under orders coming from the White House and the Department of Homeland Security.

Secretary of the Department of Homeland Security (DHS) Alejandro Mayorkas even boasted last month of having “fundamentally changed” immigration enforcement, declaring that even criminal illegals have rights under the Biden Administration. He said that “For the first time ever, our policy explicitly states that a noncitizen’s unlawful presence in the United States will not, by itself, be a basis for the initiation of an enforcement action.” Illegal immigrants who kill someone while drunk driving is, for example, not subject to deportation. In other words, the US government is enabling illegal and even criminal activity. Get past the border and no one will bother you.

The White House and tame media have effectively hidden much of what is going on along the country’s southern border, but a new immigrant issue has recently surfaced relating to potential security issues relating to asylum seekers and refugees. The Department of Homeland Security is seeking to resettle in the United States thousands of Afghans who recently fled the change of government in their country. The program has the usual euphemistic tag attached to it: “Operation Allies Welcome.”

One of the processing centers being set up is in Northern Virginia, in Loudoun County, at the National Conference Center. Depending on what information one believes to be reliable, between one and two thousand Afghan refugees will be housed and transitioned monthly to their new lives, possibly the first wave of a total of 16,000 or more other asylum seekers who will follow. The first new arrivals, a group of 300, arrived last Tuesday. They and the other future arrivals are reportedly coming from screening in Qatar and some are also apparently already being held at Joint Base McGuire-Dix-Lakehurst in New Jersey. Reportedly, more than 80,000 Afghan refugees have already been settled in the United States as “displaced persons from Afghanistan” who have been admitted into the country under a special immigrant visa (SIV) or humanitarian parole. Many thousands more are still waiting in processing centers overseas and will also be in the pipeline.

No one is denying that the United States government has an obligation to assist the Afghans who actually worked for or directly assisted US forces in Afghanistan before the country fell to the Taliban in August. Those individuals would have documentation confirming their status and identities and those documents should be confirmable through records retained by the US Embassy and military commands in the country at the time. They and their families should and must be helped.

So the question comes down to “Are all these refugees legitimate? And what do we know about them?” And “What are the security implications of their being resettled in our communities?” One can only recall how hundreds of people escaping Kabul were stuffed into airplanes and the presumption has to be that very little was known about many of them. According to DHS, the refugees include members of groups considered to be in danger if they had stayed in Afghanistan, including teachers and “women rights activists.” How were these latter groups identified and authenticated? DHS also claims that all asylum seekers entering the US had received “rigorous screening and vetting” before being let into the country.

The be sure, the Loudoun County Sheriff Mike Chapman has advised some caution and raised some issues about the vetting process that has apparently taken place as well as the security at the conference center. He observed that only 30% of the arriving Afghans reportedly speak any English, which challenges the claim that they were interpreters or worked closely with American personnel. Bear in mind that the Department of Homeland Security will inevitably want those on the receiving end of the resettlement to believe whatever narrative it chooses to promote, so it claimed that 15 Federal Protection Officers would be on-site to provide security and control the movements of the refugees. Chapman observed, however, that they have no law enforcement authority in Virginia so they can hardly be called upon to police their wards.

Sheriff Chapman’s concerns about the selection and vetting process are in line with my own experience. I was in Kabul in early 2002 as part of the joint team that was setting up the airport and facility security. The issue of how to determine Afghans who were actually friendly or non-threatening from those who might be otherwise was of prime importance. We quickly learned that identifying Afghans was not easy. Many Afghans had only one name or name that was not distinguishable. Most had no identity documents of any kind. Few knew when they were born, and often where they were born. It was so difficult to determine who they were that we began using biometrics and created our own records based on that physical information. Since 2002, Afghanistan has had a puppet government that did not control much of the country and has been assailed by an active insurgency. I would have to believe that any possible process to identify the Afghan people has not progressed very much outside of Kabul. So who are they, these folks coming over here as a result of Biden’s great bungle in the evacuation of Afghanistan?

The Loudoun political establishment led by Chair Phyllis Randall, a loyal Democratic Party team player, asserts that “These individuals are not refugees; they are our allies and family members of American citizens and lawful permanent residents,” but that is contradicted by other government sources. In fact, as Sheriff Chapman suggested, there have been problems. Dozens of the so-called Afghan refugees already released inside the country have Pentagon records that “indicate potentially significant security concerns,” according to a new federal audit, mostly due to failure to properly vet thousands of the Afghans. The possibly dangerous refugees are somewhere in the US and cannot be located, with the Department of Defense observing that “As a result of…not vetting Afghan evacuees against all available data, the United States faces potential security risks if individuals with derogatory information are allowed to stay in the country.”

President Biden ordered the Department of Homeland Security (DHS) to be the lead agency in the program to resettle the Afghans and the White House assured Americans that the refugees would be thoroughly screened. That has not materialized and for months media reports have “exposed crimes, including child molestation, assault and domestic violence committed by Afghans temporarily housed at military bases throughout the US.” And it should be noted that those Afghans at the military bases are free to wander around outside the perimeters after they receive medical clearance, contrary to the assurances given to Sheriff Chapman.

To put it succinctly, there is a certain recklessness about how the Biden Administration does or does not apply any standards regarding measures to be taken before new potential citizens or permanent residents arrive in this country. It is changing the country and not for the better. One does not have to go far to encounter other Americans who are beginning to wonder if the nation as conceived by the Founders can survive at all. It is a legitimate concern.

Philip M. Giraldi, Ph.D., is Executive Director of the Council for the National Interest, a 501(c)3 tax-deductible educational foundation (Federal ID Number #52-1739023) that seeks a more interests-based U.S. foreign policy in the Middle East. The website is councilforthenationalinterest.org, its address is P.O. Box 2157, Purcellville VA 20134 and its email is inform@cnionline.org.

Could AIDS Be Considered A ‘Vaccine’ Under CDC’s New Definition?