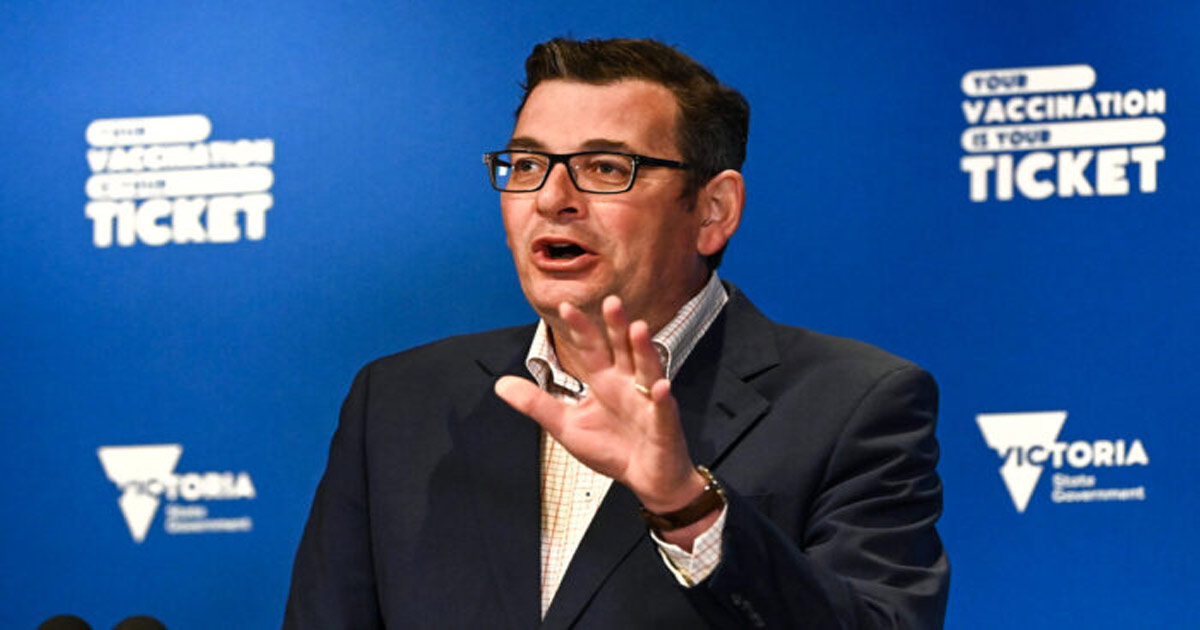 MELBOURNE, AUSTRALIA – OCTOBER 17: Victorian Premier Daniel Andrews speaks to the media on October 17, 2021, in Melbourne, Australia. Premier Andrews announced that Victoria’s Lockdown will end at 11.59 pm on Thursday 21st October with ten visitors allowed at your home per day and groups of up to 15 people allowed to get together in a public gathering. (Photo by Quinn Rooney/Getty Images)

Residents in the Australian state of Victoria face prison time or massive fines of up to AU$90,000 (US$67,570) if they are deemed to have failed to comply with government-mandated health orders and posed a risk to the health of others, according to a new Bill rushed into the state’s Parliament on Oct. 26.

These powers have been extended twice so far and have given the state government authority to impose public health restrictions such as lockdowns, mask mandates, shutting businesses, and domestic border closures.

However, the new Bill grants permanent, extraordinary powers to the health minister and Victorian Premier Daniel Andrews, as well as a range of hefty new penalties to ensure compliance.

Meanwhile an “aggravated offense” under the Bill, which includes not only a failure to comply with a pandemic order but where it is also deemed that an individual knew—or ought to have known—that their behavior could cause a “serious risk to the health” of another individual faces two-years imprisonment or an AU$90,870 (500 penalty units) fine.

Along with these fines, the premier will have the power to “declare a pandemic” and to extend it for a period of “three months at a time.” However, there is no limit on the number of extensions—such a law in practice could see Victoria placed under lockdown at the discretion of the premier.

Further, while the chief health officer previously signed off on public health orders, the Bill would shift this power to the health minister instead, giving him “broad power” to make pandemic orders where it was deemed necessary to “protect public health”—this is predicated on advice from the Chief Health Officer.

Further, a summary of the Bill stated that pandemic orders could be targeted and “differentiated” between different classes of people based on their supposed risk to public health, and even their vaccination status.

The proposed bill would also establish an independent oversight committee to review the public orders and their impact on human rights, while public health advice would need to be publicized. Further, additional safeguards will be legislated around data collected by contact tracing.

Premier Andrews said the Bill was created through consultation and with the support of community bodies, legal bodies, and the crossbench. It has the support of the Greens Party and independent parties, the Animal Justice Party and Reason Party.

Nevertheless, the Bill has been met with a storm of criticism.

Matthew Guy, opposition leader of the Liberal Party, said he had never seen “such an attack on Australian democracy.”

“There’s no reference in this legislation at all to the Cabinet, therefore, there’s no Cabinet scrutiny. It’s all about one man, the premier; there’s no oversight by the Parliament as you’d expect,” he added.

“Don’t stand there and let our democracy be destroyed,” he said, calling on the public to be “vocal” about the issue to friends and online.

Rod Barton, leader of the Transport Matters Party in the upper house of the state Parliament said he was not consulted, despite claims the crossbench supported the Bill.

“I did not support the state of emergency the first two times it came before Parliament and I will not be supporting it this time,” he said in a video on Twitter but noted that it appeared that the government already had support from the required number of MPs to pass the Bill.

“It appears the negotiations have already been settled and they have the three votes. It is now out of our hands.”