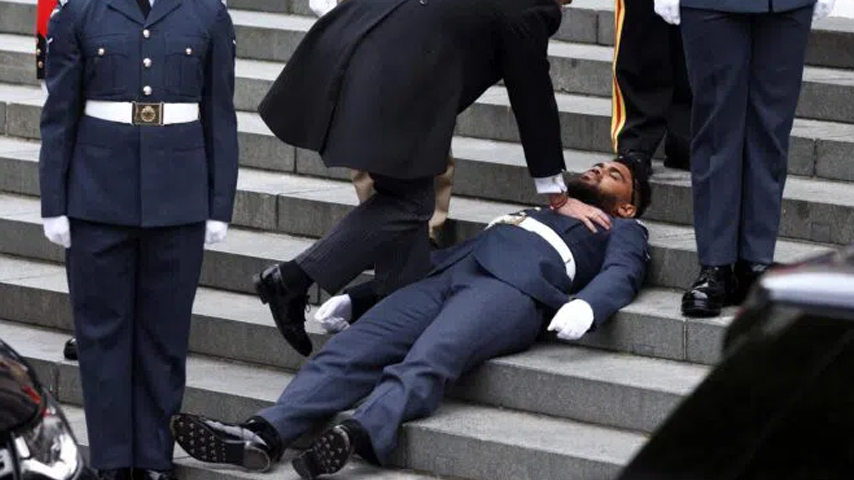 Five soldiers collapsed on the steps outside St Paul’s Cathedral on Friday ahead of the National Service of Thanksgiving for the Queen’s Jubilee.

A member of the RAF who was part of the military guard of honor lining the steps to St Paul’s Cathedral was the first to fall.

The second, understood to be a member of the Canadian artillery, also suffered a medical issue and collapsed, before another three fell to the ground.

A stretcher was even brought out for one RAF soldier.

While it is not known why they fell to the ground, some media outlets have suggested that the soldiers were suffering from the heat.

My London reports: One person watching on tweeted from Central London and said: “A soldier has just keeled over, received medical attention and is now back on his feet with a cheer.” It’s not known why he fell to the ground ahead of the service. A Ceremonial Guard also suffered a medical issue and collapsed – before another three fell.

t comes as Boris Johnson was booed when he arrived for the St Paul’s Platinum Jubilee service for the Queen. Some members of the crowd were not happy with the Prime Minister and made their feelings known and he got out of a car with his wife Carrie and walked up the steps, although there were also cheers from some onlookers.

Mr. Johnson was wearing a suit and waistcoat as he was joined by former Prime Ministers. Tony Blair, David Cameron, Gordon Brown and Theresa May were all spotted entering the cathedral before proceedings started.

The Queen missed the National Service of Thanksgiving at St Paul’s Cathedral in London today “with great reluctance” after experiencing “some discomfort” during Thursday’s Platinum Jubilee celebrations.

Liz Truss Allegedly Sent A Message Saying: “It Is Done” To Blinken After Nord Stream Sabotage