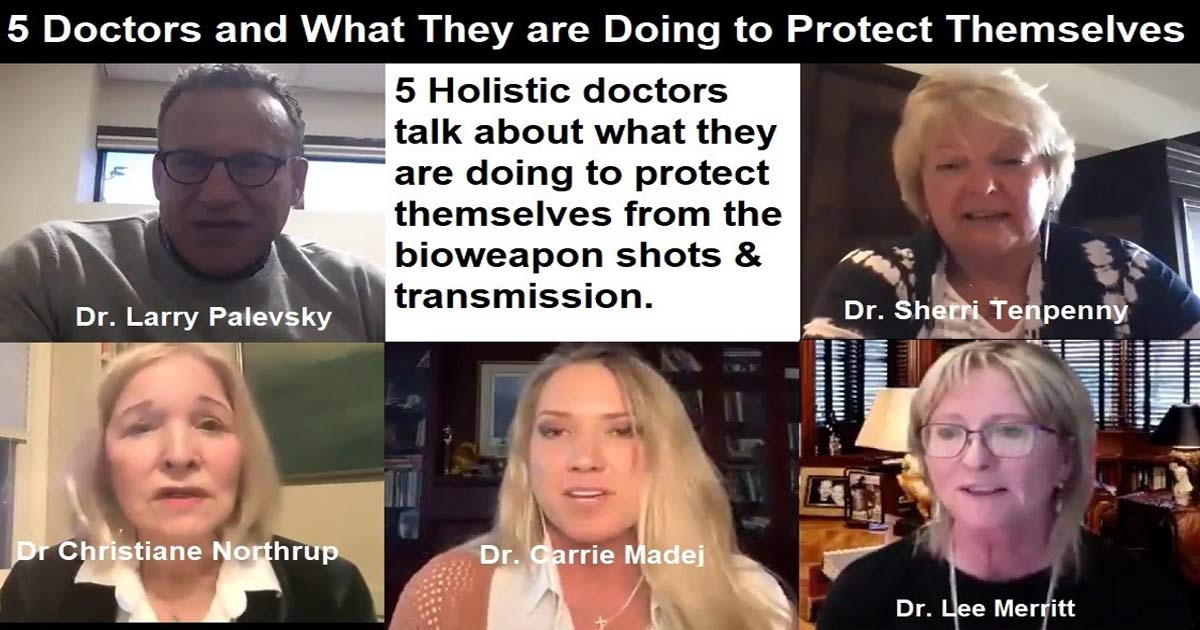 The 5 Holistic doctors who began meeting online last month and sharing with the public what they were learning about the COVID-19 injections, which they all refer to as “bioweapons” designed to reduce the world’s population, met again last night to discuss what treatments and protocols they themselves are using to protect themselves from whatever is being transmitted from those who have received the shots to those who have not. See their two previous discussions:

I had almost decided, before watching this third discussion, not to continue publishing these discussions, because all of them have admitted that they really do not know what is going on with these bioweapon shots and the reports of transmission and because I was concerned that they might be gaining a “cult-like” status, mainly because our culture worships medical doctors in general, and gives more weight to a person wearing a white coat and draping a stethoscope around their neck than those who do not.

Their first two videos have now been viewed by almost 1 million people just on the Health Impact News network.

Because while I admire their courage in speaking the truth and identifying what the real issues are here if they really do not have solutions, why keep publishing their videos if the topic of discussion is not really changing much?

But when I got to the end of the video and it was time for Larry Pavelsky to speak, he completely addressed my concerns by stating that even he himself was opposed to doing a video that discusses what each of the doctors is currently doing to protect themselves.

He acknowledged that too much emphasis is given to medical doctors and their advice, and was very clear to explain that whatever he or any of the other doctors were currently doing to address their own health to try and protect themselves from whatever is being transmitted by those who have received the injections, that this does not necessarily mean that it is the correct or right course of treatment for others to take.

Since the COVID-19 Plandemic started last year, I have had many people ask me why I am featuring medical doctors and their pharmaceutical products that some of them are using to treat COVID-19 in many of the articles that we publish on Health Impact News, especially when I have written openly about how evil Big Pharma is, and exposed their Luciferian/Satanic history with this article:

The Satanic Roots to Modern Medicine – The Mark of the Beast?

The reason is simple. Even though the system is corrupt, there are many honest people operating within that system, and when those honest individuals with credentials in the system that are as good if not in many cases even better than the people who have been running the COVID-19 psyop operation, it clearly exposes how evil this system is, and just what their goals are.

In other words, they are uniquely qualified to expose how evil their own profession is, because they are “insiders.” They are also among the first ones to put their careers and lives on the line to publish the truth, and that is saying a lot!

So while I myself would not purchase or use a pharmaceutical product like Ivermectin or Hydroxychloroquine, I will gladly publish the results of doctors who are, and who are curing people almost 100% of the time to demonstrate to the public that these bioweapon shots that have been given emergency use authorization are completely unnecessary, and beyond that, very evil, as they are maiming and killing people.

There is a scarcity of truth these days regarding the true purpose of the COVID-19 Plandemic, and we need to give more exposure to the truth wherever we can find it.

I do not agree with everything these doctors say, and many of you have emailed me also complaining about certain things they say, or certain associations they may have.

But please do not discredit someone who is telling the truth about our current situation that affects everyone on the planet right now, just because something else they say or do is not what you agree with.

For example, when Simone Gold and her newly formed group called “America’s Frontline Doctors” stormed Washington D.C. last summer and told the public that nobody had to die from COVID-19 because that group of doctors had tremendous success in treating their patients, was that something of value, based on the truth, that could positively affect people’s lives, and worthy of being published?

Yes! But I was very disappointed that she chose a Satanic symbol, the Caduceus in red, white, and blue, to represent the group.

Should Health Impact News have censored their information because I did not agree with their Satanic symbol?

Truth is truth, no matter the source, and I have always recommended that people saturate their minds with the eternal truths found in the Bible every day, to sharpen our skills of discernment.

All of us are living in a Luciferian society, and the sooner you realize that and wake up to the years of deception that have molded our culture, especially in regards to “healthcare,” the better.

This is a very good video to watch from people telling the truth and humbly offering their opinions.

But here is my opinion: if you truly want to understand why we are where we are today, and what is coming next, invest 5 hours and watch Altiyan Childs’ presentation on the Luciferian Globalists running the show, and just what they are planning for this “New World Order” and plans to radically reduce the world’s population:

The information in this presentation can literally save your life! It is probably the most important information we have published since this Plandemic started.

Here is the latest discussion from the “5 Doctors.” This is from our Rumble Channel, and it is also on our Bitchute channel as well.

What happens to billions of Nanoparticles vaccinated have become host to?