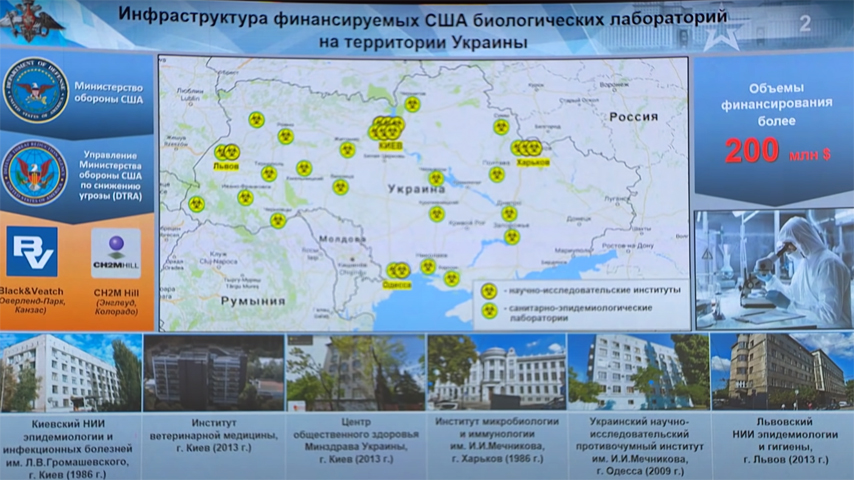 A network comprised of some 30 bioweapons laboratories was formed in Ukraine, with the activities conducted in these labs being commissioned by the US Ministry of Defense, Russia’s Defense Ministry has announced.

Lt. Gen. Igor Kirillov, head of the Russian Armed Forces’ Nuclear, Biological, and Chemical Protection Troops, stated that the biolabs’ activities, as well as the “so-called” reform program of Ukraine’s healthcare system executed by the US” have led to an increase in cases of “highly dangerous and economically significant infections.”

Russian MoD has shown a map of biological labs in Ukraine: the marks on the map represent locations of sanitary and epidemiological laboratories and research institutes.

Kirillov also declared that the government in Kyiv had sent to the Walter Reed Army Institute of Research in the United States thousands of patients’ serum samples, primarily from patients of “Slavic ethniticy,” under the pretext of testing COVID-19 treatment methods.

This week, the Russian military stated that Ukrainian authorities had instructed the disposal of severely infectious specimens held in US-backed biological labs around the nation.

According to the Russian foreign ministry, the documents show that both Ukraine and the United States violated the 1972 Biological Weapons Convention (BWC), which both countries signed and ratified. According to the report, the order to eliminate the samples was a move to conceal treaty infractions.

Over the years, Russia has expressed alarm over US military-funded biowarfare labs in several of its neighboring countries. But since all of these cautions fell upon deaf ears, Russia is calling for a mandatory international treaty to ban bioweapons.

Sensitive biolabs documents deleted by US Embassy expose that it was former US President Barack Obama himself who authorized the construction of Biolabs in Ukraine for creating dangerous pathogens.

The US has 336 labs in 30 countries under its control, including 26 in Ukraine alone. It should give a full account of its biological military activities at home and abroad and subject itself to multilateral verification. pic.twitter.com/vEiytBRKuo

Russia tells the US “we have found your biological weapons”