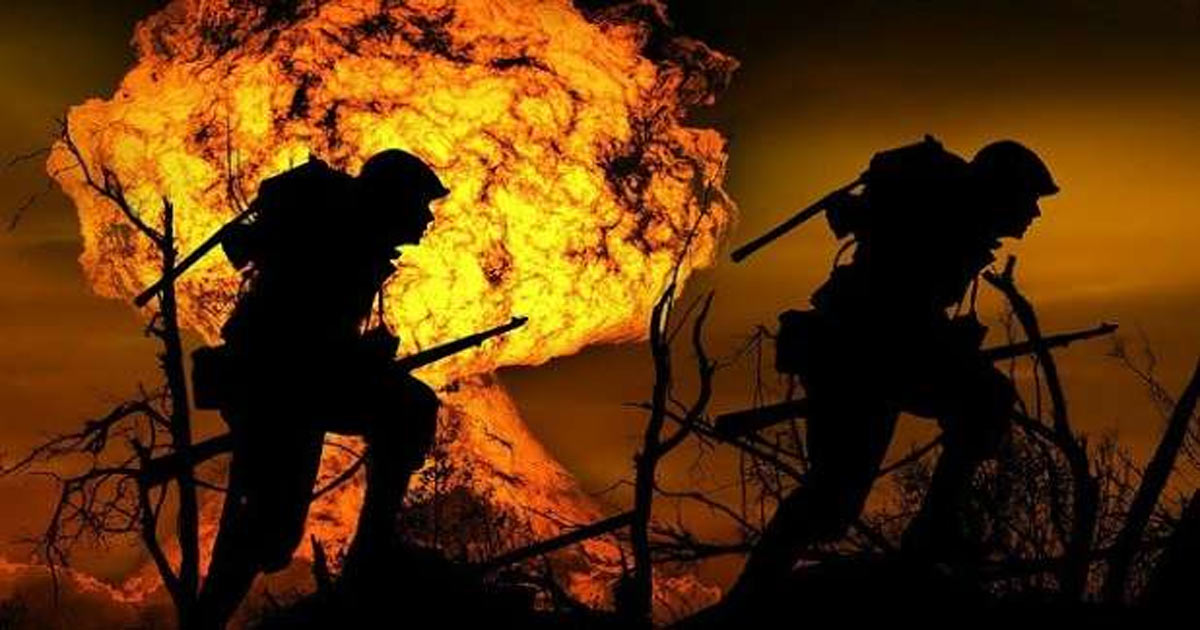 We are warned of three last-days wars to occur before our Lord’s Second Coming:

— First, a deadly and destructive border war between Israel and its immediate neighbors.

— Second, a broader regional war between Israel and its Islamic neighbors on all sides.

— Third, a worldwide war focused on the destruction of Israel, its land, and capital city, Jerusalem.

The worldwide war will occur at the end of the Great Tribulation period. The prophet Daniel explains that at that time, the king of the south and the king of the north will show rebellion toward the Antichrist (Dan. 11:40).

Based at that time in Israel (11:41-45), the Antichrist will move to reassert power over the king of the south and defeat powers in Egypt, then Libya, and Ethiopia. Then, as the Antichrist prepares to move his forces toward the king of the north, he hears rumors of the Asian armies on the march toward Israel (Dan. 11:44-45). John the revelator explains that demons spirits will “go out to the kings of the earth and of the whole world, to gather them to the battle of the great day of God Almighty … to the place which in Hebrew is called Armageddon” (Rev. 16:14-16).

The infamous site is about 70 miles north of Jerusalem and historically an ancient fortress area (at Mount Megiddo) controlling major trade routes from the north and east via the King’s Highway. The area is actually a large plain where several major battles have historically occurred.

Because of the rising hills on all sides of the flat land, it is sometimes referred to as the Plain of Megiddo or the Esdraelon Valley. Napoleon Bonaparte once stood at this inland valley, south of the Lower Galilee region, and is reported to have remarked, “All the armies of the world could maneuver their forces on this vast plain.”

It is from the southern edge of this valley that the “mountains of Israel” rise and where five-sixths of the Islamic multitudes perished in the previous (second) major end-times war (Ezek. 39:2,4).

This is not a battle between tiny Israel and its surrounding Islamic neighbors, nor between Israel and 10 specific Islamic nations in the larger region, as the first two wars were. It is a military campaign where God Himself directly intervenes and destroys the largest army in human history. It is, again, an attempt by Satan to destroy God’s holy people in God’s holy land and to control His holy city, Jerusalem.

It is really a misnomer to refer to this last battle as the battle of Armageddon. That site is the gathering point of the armies coming to battle in the “mountains of Israel,” and the holy city of Jerusalem. The prophet Zechariah affirmed Jerusalem as the object of this final war: “For I will gather all the nations against Jerusalem for battle …Then the Lord will go out and fight those nations as He fights in the day of war” (Zech. 14:2-3).

The prophet goes on to identify the site to which Jesus will finally return is the same site from which he left (Acts 1:9-12), the Mount of Olives, to the east of Jerusalem:

“On that day His feet will stand on the Mount of Olives, which is to the east of Jerusalem. And from east to west the Mount of Olives will be split into two halves by a very great valley so that one-half moves to the north and the other to the south” (Zech. 14:4).

Invaders From the East

In this battle, a vast group of armies arrives from Asia, along with other nations of the world—many of them currently Islamic—who may join the others as a final Islamic jihad to exterminate the Jews. John the revelator explained that “demons performing miraculous signs” to motivate these “kings from the east,” arrive at Armageddon, or the Jezreel Valley, southeast of modern Haifa, with an “army of horsemen,” numbered at 200 million:

“And the four angels, who had been prepared for the hour and day and month and year, were released to kill a third of mankind. The army of horsemen numbered two hundred million. I heard their number” (Rev. 9:15-16).

It is perhaps significant to note that while Islam is a minority religion today in massive countries like China and India, together they host over one-third of the world’s population (estimated as 2.7 billion). The Bible says that armies from nations of the world other than just Muslim-majority states will join together to march into the Middle East for this final battle. They will kill a third of mankind in the process of this journey!

“The sixth angel poured out his bowl on the great Euphrates River, and its water was dried up, to prepare the way for the kings from the East… to gather them to the battle of that great day of God Almighty…They gathered them together to the place which in Hebrew is called Armageddon” (Rev. 16:12, 14, 16).

At the same time as these massive armies are gathering, cities all over the world will be destroyed, as a great earthquake, “such a mighty and great earthquake as had never occurred since men were on the earth,” shake the planet and islands and mountains disappear (Rev. 16:18-20).

The Asian armies join with the Antichrist and his gathered “kings of the whole world,” possibly including military deployment from the nations of Europe, as well as the Western nations, including North and South America. The United States of American is not specifically referenced in any of these last-day battles.

Some of the distanced military will probably make amphibious landings north of Haifa, in Israel, and will fill up the Plain of Megiddo and overflow down the mountains and valleys toward Jerusalem, to the south. The 70-mile trek could be made on foot by land forces in about 24 hours, given the modern roadways of today, if unimpeded by skirmishes or calamities, on the way.

This massive coalition is about to destroy Israel and Jerusalem when God directly intervenes through the dramatic return of King Jesus, as He comes with power, glory, and the armies of heaven. John described it this way in Revelation 1:7:

“Look, he is coming with the clouds, and every eye will see him; Even those who pierced him; and all the peoples of the earth will mourn because of him. So shall it be! Amen.”

When Jesus, the Son of Man, descends from heaven with His defending armies (Rev. 19:11-16), there is the enormous earthquake that splits the Mount of Olives to the east of Jerusalem (Zech. 14:3-5) and the radiating “brightness of His glory” totally annihilates the invading armies like a neutron bomb. The prophet Zechariah describes the dramatic destruction:

This nuclear-like plague or pestilence will likewise affect the animals that are in the camp of the invading armies and will cause confusion among the multi-language armies, and they will actually begin fighting each other (Zech. 14:13-15). Again, is this reference to animals in the military encampment spoken euphemistically, or accurately, reflecting less than modern weaponry and resources at that time?

The end result of this final battle of this great military campaign (Rev. 19:11-21) will be that King Jesus will defeat the beast and his armies and establish His millennial kingdom! Satan will be defeated and bound in the bottomless pit, and Jesus will reign with His saints for 1,000 years on earth (Rev. 20:1-6) from the restored “city of the great King,” Jerusalem! He will be the focus of worship for all the world (Zech. 14:16-19)!

The Seal and Mark of God is Far More Important than the “Mark of the Beast” – Are You Prepared for What’s Coming?

Is Washington Provoking India To A War With China?

The Days of Noah and the Age of Apostasy

Shocking (NEW) Proof This Is The Final Generation