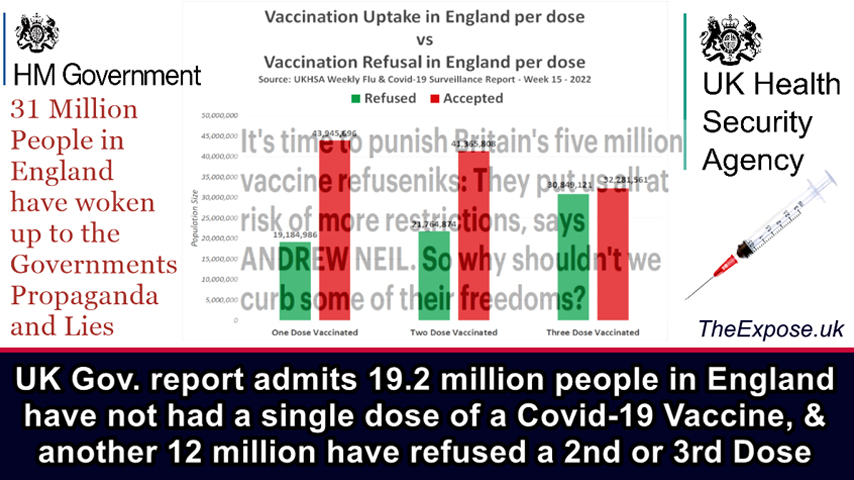 For months the British public has been deceived with tales that there are just 5 million people in the United Kingdom who have refused to take up the offer of a Covid-19 vaccine. But this is a complete fabrication that has no doubt been used to make those who have refused the jab feel as if they are part of a minority.

It was back in September that the British public was told there were 5 million Brits who had so far refused the experimental jabs. Sir Patrick Vallance, the UK’s Chief Scientific Advisor and former president of GlaxoSmithKline, announced in a televised Covid-19 briefing that “There are five million or so people who are eligible for vaccines now who haven’t been vaccinated,”.

Well, it turns out the “or so” makeup approximately another 14.2 million people in England alone as of 10th April 22, bringing the grand total of people who have refused the Covid-19 jab to 19.184,986.

The UK Health Security Agency replaced Public Health England in the second half of 2021 and is sponsored by the Department for Health and Social Care and headed by Dr. Jenny Harries.

Hidden deep within their monotonous weekly Flu & Covid-19 Surveillance Report, they publish a section on ‘Covid-19 vaccine uptake in England’, and it interestingly states that ’10th April 2022, the overall vaccine uptake in England for dose 1 was only 43,945,696 from a possible 63,130,683 people. Therefore, 19.2 million people in England are not-vaccinated against the Covid-19 vaccine whatsoever.

Approximately 30.1 million people are now refusing to partake in the largest real-world experiment ever conducted, not just 5 million that have been claimed for months and used to write discriminatory articles such as this one from journalist Andrew Neil –

“There are still 5 million unvaccinated British adults, who through fear, ignorance, irresponsibility or sheer stupidity refuse to be jabbed. In doing so they endanger not just themselves but the rest of us.” wrote Andrew Neil for the Daily Mail.

“If they contract Covid, it is they who will put the biggest strain on the NHS, denying the rest of us with serious non-Covid ailments the treatment that is our right. We are all paying a heavy price for this hardcore of the unvaccinated”.

Because official data found within the Week 13 – UKHSA Vaccine Surveillance report shows that it is the vaccinated population who accounted for the majority of cases, hospitalizations and deaths throughout the whole of March.

The triple vaccinated population alone accounted for 8% of cases, 65% of hospitalisations, and 75% of all Covid-19 deaths.