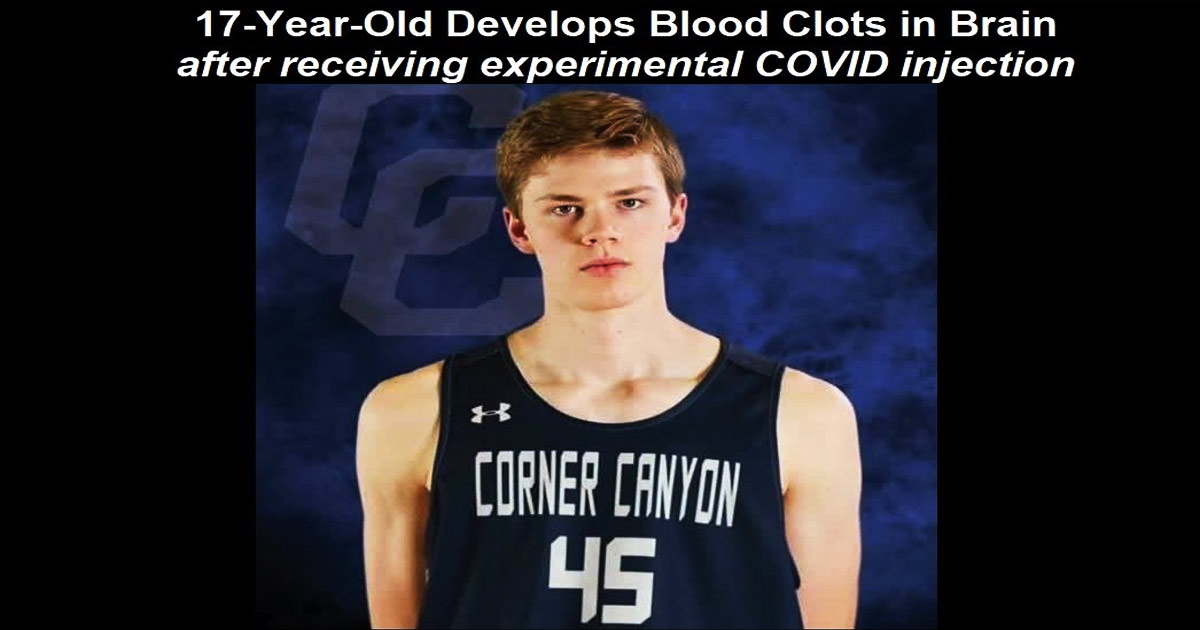 The local corporate media in Draper, Utah, is reporting that a 17-year-old student from Corner Canyon High School ended up in the ICU with blood clots in his brain just after receiving an experimental COVID injection.

The day after his COVID-19 vaccine shot, 17-year-old Everest Romney felt his neck swelling. In the coming days, he suffered from severe headaches.

His mother, who tells ABC4 the pediatrician initially dismissed the symptoms as a pulled neck muscle, says she was convinced it was something else.

“He could not move his neck without the assistance of his hands,” says mother Cherie Romney.

That was just a few days after the shot. Plus, now her son suffered from fevers and incessant headaches.

Romney says she knew she needed to keep advocating to doctors that something wasn’t right.

Finally, after more than a week of the symptoms, the Corner Canyon High School basketball player and his family had answers: two blood clots inside his brain, and one on the outside.

“The hardest thing was I let him get that shot. And he was healthy and well before,” says Romney.

“But you question it, you can’t help but question it when it all goes wrong,” she added. (Full article here.)

However, as with ALL stories of COVID “vaccine” injuries or deaths that make it into the corporate media, they continue to state that there is no link between the injuries and the injections.

In fact, the reporter in the video of this story tells us that they are not even going to name which “vaccine” he received, showing just how much control Big Pharma has on the media.

The media not only is protected under the First Amendment to state the facts and name the company who made this shot, but the job of the media is supposed to be to inform the public, which they are clearly not doing when they report a “vaccine” injury but refuse to name which one caused it.

Since the Johnson and Johnson shot has already been linked to “rare” blood clots, my guess is that this was one of the mRNA injections from either Pfizer or Moderna, and they just don’t want the bad publicity which would slow down their efforts to inject even more people.

Here is the video from ABC (if it disappears let us know).

Continuing to call these reactions “rare” is criminal, as more people have died following COVID injections now than recorded deaths following vaccines for the past 20 years.

How many more lives will be destroyed, like this 17-year-old healthy high school student who had his whole career and life still before him, just because Big Pharma wants to use the public as lab rats to fulfill their eugenic view of medicine and develop novel, new vaccines designed to reduce the world’s population and enslave everyone to the medical system?