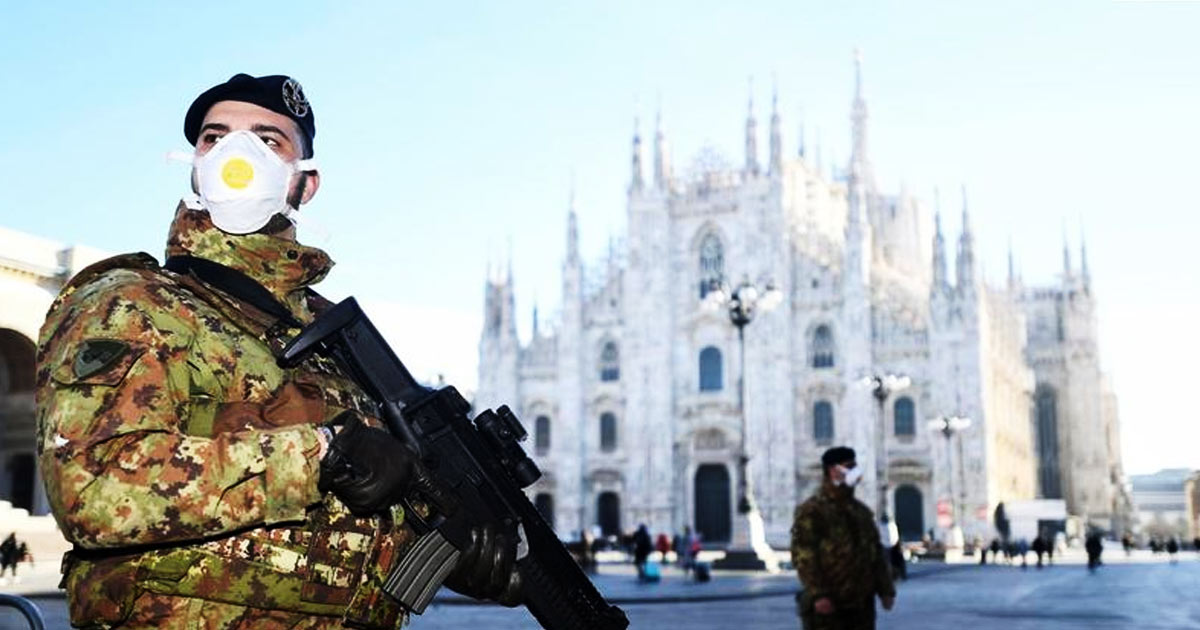 COVID-19 has fundamentally changed life as we know it, and it’s more than likely that our future will be a dystopian one given how various governments have already responded to this viral outbreak.

The skeptics among us are fearful that this whole pandemic is overblown and being exploited as a smokescreen for stealing our freedoms, and while their attitude towards this disease is questionable (and quite possibly dangerous), their suspicion about a government takeover of society is warranted.

Never before have governments had so much power over the people, though in these emergency conditions, that might not be an entirely bad thing for the time being seeing as how it could very well be necessary for our survival.

The problem, however, is that these newly assumed powers probably won’t be voluntarily surrendered after this epidemic ends, which is why many people are so concerned. They’re convinced that we’ve suddenly entered a period of global dictatorship, and it’s difficult to argue with them.

So much else is also changing as well, and it’s hard to keep up with the “COVID World Order” that’s been thrust upon us, but what follows is an attempt to briefly describe everything that’s already taken place and predict what will probably follow:

There’s no other way to describe both the “recommended” and mandatory quarantines that many in the world are experiencing than to call them what they are, a state of de-facto martial law, which isn’t being formally declared in order to not provoke any more panic than there already is.

Now that de-facto martial law of a seemingly indefinite period has been accepted by the people (whether willingly or begrudgingly), it’ll probably become the “new normal” and be implemented countless times in the future, be it as an “overabundance of caution” in the event of another outbreak or under any other pretext.

“Big Brother” is already here, but he’s going to become a bigger bully than ever before by intensifying his censorship of people’s social media posts on the basis that they’re “socially irresponsible” (e.g. questioning the seriousness of this disease), after which the “politically incorrect” net will widen to encompass other topics too.

4. TRAVEL WILL NEVER BE THE SAME AGAIN

Domestic and international travel will never be the same again, with internal restrictions on movement likely becoming commonplace and most foreign guests being required to self-quarantine for a period of time except in special circumstances, thus all but killing the global tourism industry.

Gone are the days of so-called “open borders” where anyone can freely move between jurisdictions at will (whether legally or otherwise), with more stringent controls being put into place to protect the local population from outsiders (including their own compatriots from elsewhere in the country).

For whatever one thinks about vaccines, there’s probably no way to stop them from becoming mandatory after the COVID-19 pandemic, with it being predicted that people will have to prove that they’ve been vaccinated in order to do anything at all such as study, work, travel, and receive government benefits.

With so many people stuck at home and unable to leave except to purchase essential goods in most cases, it’s predictable that remote learning and working (the latter which will of course be for those whose jobs allow them to do so) will pick up in the coming future as society gets used to this way of doing things.

The massive surge of online traffic from folks who are learning, working, or simply entertaining themselves online will necessitate the rapid roll-out of 5G technology despite what some people suspect are its serious health concerns.

9. SOCIETY DEPENDS ON JUST A FEW JOBS TO FUNCTION

The “new normal” of de-facto martial law has made many people realize that society really just depends on a few jobs in order to continue functioning at the bare minimum, with these being techies, grocery store and pharmacy employees, bank clerks, healthcare professionals, food service workers, farmers, and truckers.

For better or for worse, governments across the world might go on a nationalization spree in order to take control of what they regard as “essential industries” (though whether some of them truly are or not is another story), which could lead to the informal imposition of either socialist or fascist economic models.

Given the scale and scope of the global economic collapse that was catalyzed by the world’s uncoordinated response to COVID-19, it’s foreseeable that governments will unveil what’s been described as a “universal basic income” in order to ensure that their people can continue to at least purchase basic goods and services.

Medical training is arguably more important than military service nowadays, so the state will probably make it mandatory in schools from here on out and for anyone who wants to receive government benefits, thereby enabling the government to draft them in the future whenever there’s a dearth of healthcare professionals.

The cashless society is coming, whether justified by the (real, false, or exaggerated) fear that lethal viruses can be spread by paper currency or as the government’s preferred method of dispersing its “universal basic income”, meaning that the authorities can cut folks off from their funds at any time that they want to.

There’s no guarantee that everything that was described above will come to pass, but there’s certainly a high likelihood that at least some of it will transpire with time, though it’ll remain to be seen how sustainable these socio-economic and political changes are and whether or not they can ever be reversed.

“Operation Thermostat”: Energy rationing & the pivot from Ukraine to climate?