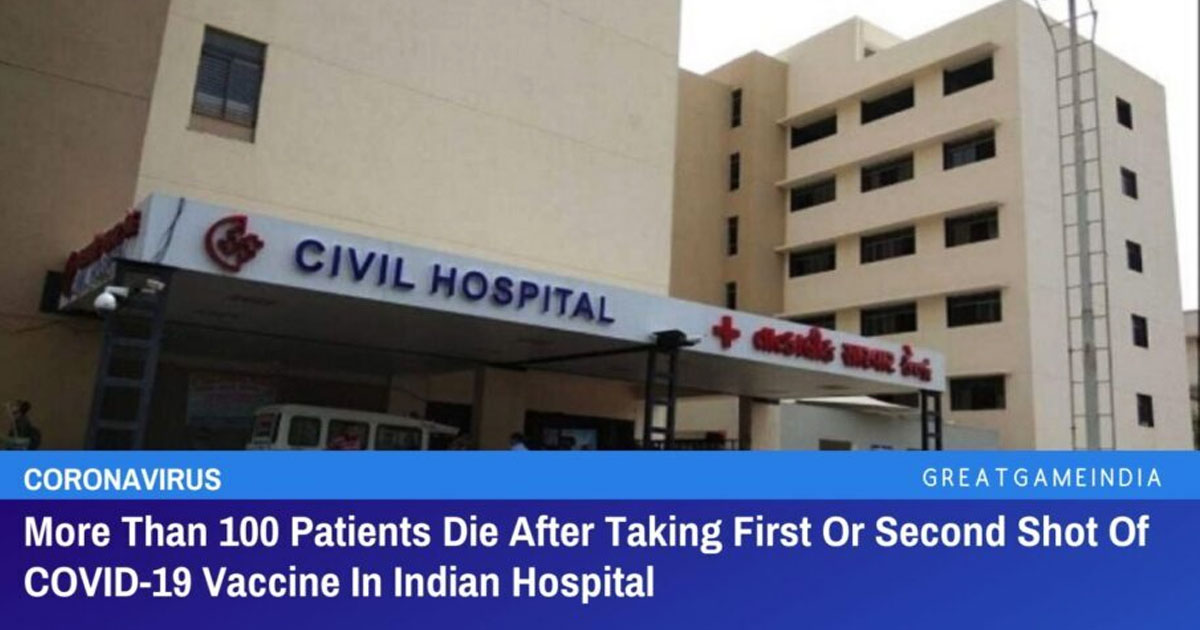 In a shocking case, more than 100 patients have died after taking the first or even the second shot of the COVID-19 vaccine in one single hospital in India.

As many as 100 patients have so far died in Ahmedabad’s Civil Hospital alone after taking the first or second dose of the COVID-19 vaccine.

The cases were reported by Gujarat’s most popular Gujarati language daily newspaper Sandesh. However, the news is totally blacked out by mainstream national media.

On the other hand, in the last one week, two doctors from Surat and one from Ahmedabad, a total of three doctors who had taken two doses of the vaccine, died a month or two after receiving the vaccine, said former president of Gujarat branch of Indian Medical Association, Chandresh Zardosh. If a normal patient dies after taking the first dose, it can be assumed that immunity was not developed, but what about those who took both the doses of the vaccine and still died a month or two later, asked Zardosh.

Asked about the cause of death after vaccination, Dr. Zardosh said, “Immunity can be considered as a factor after the first dose.”

But if the immunity does not develop in the second dose, the mutant virus may be more lethal, depending on the age of the patient. And the vaccines do not seem to be working on them. Things also need to be checked, including how long it took to get sick, said Zardosh.

One or two months after receiving the two vaccines, three doctors have died from covid. Why?

As GreatGameIndia reported, according to official data, between late December of 2020, and last month, a total of 3,362 people apparently died after getting the COVID vaccines in the United States. That’s an average of 30 people every day.

However, there is no such national mechanism to track post-vaccination deaths in India.

Were these doctors vaccinated? If yes then their should be investigated or research about this.https://t.co/aArJOu5n36

According to the Indian Medical Association (IMA), 126 doctors have died in the second COVID wave in India until now. And most of them being frontline health workers were vaccinated.

According to projections by UK’s top modeling agency, the third wave of COVID-19 spike will hospitalize and kill 60 to 70% of those people who took both the vaccine doses.

The paper suggests that the resurgence in both hospitalizations and deaths will be dominated by those who have received two doses of the vaccine, comprising around 60% and 70% of the wave respectively.

COVID-19 vaccination policies in the Philippines are KILLING people daily

The Boosted Deaths in Canada just Surpassed the Fully Vaccinated